It was the mantra for years of the longtime WXRT-FM (93.1) host — who became a household name in Chicago, known for his wit and sense of humor. Countless listeners who never met Brehmer considered him a friend.

“It is with a heavy heart that we must inform you that we all lost our best friend. Lin Brehmer fought cancer as long as he could,” fellow host Terri Hemmert wrote in a post Sunday morning. “He passed early this morning, peacefully, with his wife and son by his side.”

Brehmer announced last July that he was taking a break from the station to undergo chemotherapy for prostate cancer. Brehmer briefly returned to air in November, telling television station WBBM that “radio has been my life.”

Brehmer was with WXRT for more than three decades, most of them as morning DJ until he slid to middays in 2020. 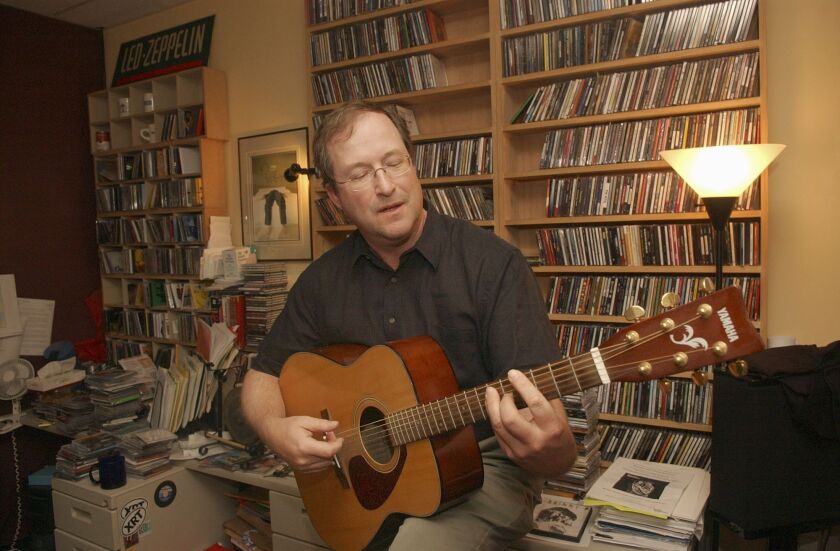 Lin Brehmer in his office at WXRT in 2006. “I think in another life he would’ve been an English professor,” colleague Mary Dixon said.

He’s perhaps best known for his “Lin’s Bin” segments, which consisted of his response to a listener’s question, interweaving prose with his encyclopedic knowledge of music and popular culture.

“‘Lin’s Bin’ was so well crafted, it was a work of art,” said Norm Winer, who was WXRT’s program director when he hired Brehmer in 1984. “It was a throwback to the Golden Age of radio. He would make you laugh out loud. He would make you weep.”

Those radio essays satisfied a creative yearning for Brehmer, who developed a love for literature in high school. “It’s a creative outlet. There is nobody looking over my shoulder,” Brehmer told the Sun-Times in 2018.

Mary Dixon, who worked alongside Brehmer as a host for 28 years, said, “I think in another life he would’ve been an English professor. He was a nerdy, philosophy and English student at Colgate. But he came up in a time when rock-and-roll was the new poetry.”

Brehmer connected with countless Chicagoans — even though they never met him in person.

“There’s a reason that I’ve heard from a few people who have been crying today, saying they feel silly because they didn’t even know him — but they did,” WXRT host Emma Mac said. Brehmer’s “connection to you was genuine, and positive, and authentic and kind.”

“Lin Brehmer was the voice of Chicago. His voice was unique and a perfect way to start the day,” former mayor and current U.S. ambassador to Japan Rahm Emanuel wrote on Twitter.

Brehmer, a Cubs season-ticket holder, had his name displayed on the marquee at Wrigley Field on Sunday.

We send our condolences to his family and friends. pic.twitter.com/2SiHRmacxY

Born in Queens, New York, Brehmer began his radio career as a Sunday morning DJ in Albany. The first song he ever played as a professional DJ was “Within You Without You” by The Beatles because, “I’ve always felt that life flows within you, but most of all without you,” Brehmer said in 2017.

At that station, he was nicknamed “the Reverend” because he would recite poetry over song introductions. “I would slip into Dylan Thomas or William Wordsworth,” he once told the Sun-Times.

Asked who he would want to meet in heaven, Brehmer said: “Here’s the thing, most of my musical heroes may not be in heaven, they may be in the third ring of the Inferno.”

Brehmer moved to Chicago in 1984 to be the music director at WXRT. He worked behind the scenes until 1990, then took a short-lived radio job in Minneapolis. “I was there for 12 months, had a great time … then found out the owner of my radio station was bankrupt. So it made things very dicey,” Brehmer said.

He came back to WXRT the next year and took Hemmert’s spot as the morning DJ.

Brehmer once described himself as an “anti-shock jock.”

“It’s just not who I am,” he told the Sun-Times. “The closest I come to shock jock is standing up for civil rights or religious freedom. That’s very shocking these days.”

Brehmer loved Chicago’s theater, music and dining scene, he said in an interview on WXRT in 2017. “I love dining out in Chicago,” he said. “Whether it’s an Italian beef with hot peppers or it’s a 12-course menu at Acadia, I love the culinary scene here.

“And of course the biggest thing is the music: from the Chicago blues, from going to Buddy Guy’s Legends, to seeing all the artists that choose Chicago as one of their main stops on their tours,” he said.

Brehmer also had an affinity for sailing on Lake Michigan. “There’s something about that moment when you get the sails up and turn the engine off and it’s nothing but the sound of the wind. It’s one of the greatest moments you can have,” he said in the interview.

Brehmer was also a supporter of the ALS community, serving as a spokesman for events and fundraisers for nearly three decades. “Lin’s dedication to the ALS community as a spokesperson of the Les Turner ALS Foundation was legendary.” Andrea Pauls Backman, the foundation’s chief executive, said in a statement.

“We’ll hold each other up through this heart-breaking time,” Hemmert wrote. “Lin would want that. Take nothing for granted.”

I just heard about Lin Brehmer. Such a wonderfully nice man. Loved his music, loved his pizza and loved his baseball. I would always see him around Wrigley. Always so kind. Awful news. Rest in peace Lin. You were all of the good things in the world. ❤️🥲 pic.twitter.com/xKPViGHDft

Like so many around Chicagoland today, I’m thinking about my longtime friend, Lin Brehmer. No one did more for music and the people of Chicago than Lin. I will miss him very much and I send along my sympathies to his wife and son. pic.twitter.com/WJDsyJKPmw