Many of us are returning to work or school after spending time with relatives over the summer period. Sometimes we can be left wondering how on earth we are related to some of these people with whom we seemingly have nothing in common (especially with a particularly annoying relative).

However, in evolutionary terms, we all share ancestors if we go far enough back in time. This means many features in our bodies stretch back thousands or even millions of years in our great family tree of life.

In biology, the term “homology” relates to the similarity of a structure based on descent from a shared common ancestor. Think of the similarities of a human hand, a bat wing and a whale flipper. These all have specialist functions, but the underlying body plan of the bones remains the same. 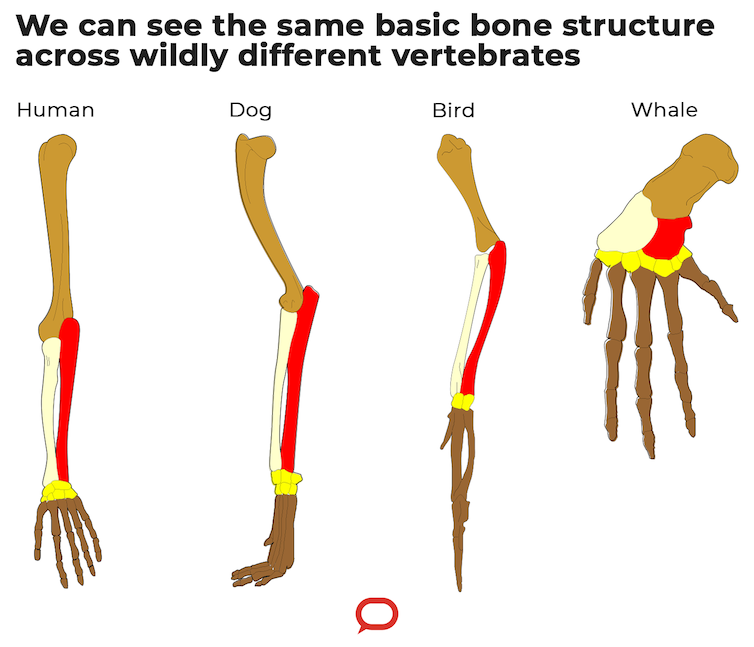 This differs from “analogous” structures, such as wings in insects and birds. Although they serve a similar function, the wings of a dragonfly and the wings of a parrot have arisen independently, and don’t share the same evolutionary origin.

Here are five examples of ancient traits you might be surprised to learn are still seen in humans today.

What makes us human? This question has plagued scientists and scholars for centuries. Today it seems relatively straightforward to tell who is a human and who is not, but looking through the fossil record, things very quickly become less clear.

Does humanity begin with the origins of our own species, Homo sapiens, from 300,000 years ago? Or should we stretch things back more than three million years to ancestors such as “Lucy” (Australopithecus afarensis) from eastern Africa? Or even further back to our split from the other great apes?

Whatever line you draw in the sand to pinpoint the birth of humanity, one thing is certain. The act of habitually walking around on two legs, known as “bipedalism”, was one of our ancestors’ greatest steps. 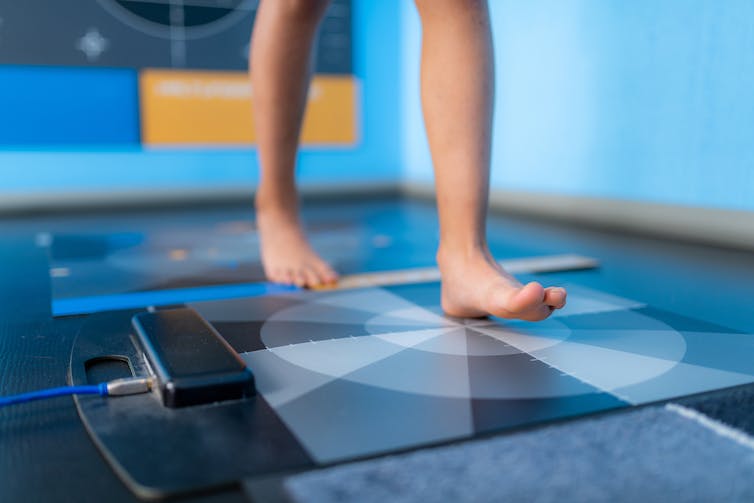 It’s hard to overestimate the importance of bipedalism in human evolution.
Microgen/Shutterstock

Almost every part of our skeleton was affected by the switch from walking on all fours to standing upright. These adaptations include the alignment and size of the foot bones, hip bones, knees, legs, and vertebral column.

Importantly, we know from fossil skulls that rapid increases in our brain size occurred shortly after we started walking upright. This required changes to the pelvis to allow for our larger-brained babies to fit through a widened birth canal.

Our broadened pelvis (sometimes called iliac flaring) is a homologous feature shared with several lineages of early fossil humans, as well as all those living today.

Those big brains of ours then fuelled an explosion of art, culture and language, important concepts when considering what makes us human.

A hole in your head

In addition to your eyeballs sitting in their orbits, you may be surprised to learn that you have other large holes (known as fenestrae) in your skull.

A single window is found on each side of the human skull, uniting us with our shared common ancestors from over 300 million years ago.

Animals with this single window in their skulls are known as synapsids. The word means “fused arch”, referring to the bony arch found underneath the opening in the skull behind each eye.

Today all mammals, including humans, are synapsids (but reptiles and birds are not).

Other famous synapsids from prehistoric times include the often misidentified Dimetrodon. The sail-backed ancient reptile is commonly mistaken for a dinosaur. However, with its sprawling limbs and single temporal fenestra it instead belongs to a lineage sometimes referred to as “mammal-like reptiles”, although we prefer the more accurate term of synapsid. 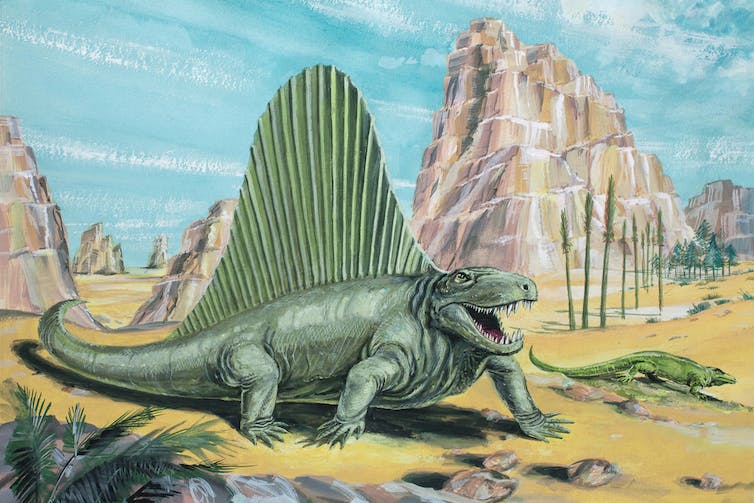 Artist’s impression of a Dimetrodon, a long-extinct animal that was not a dinosaur.
David Roland/Shutterstock

I am typing this article on my computer using ten of my digits (fingers and thumbs; digits also refer to toes but mine don’t reach the keyboard).

This pattern of five digits in the human hand or foot, known as a “pentadactyl limb”, is found in most amphibians, reptiles, birds and mammals.

But fish don’t have fingers and toes, so when was it that digits first evolved?

A recent study by myself and colleagues actually described the first digits found preserved within a fish fin. We used powerful imaging methods to peer inside a 380-million-year-old fossil called Elpistostege from Quebec, Canada, to reveal the oldest fish fingers!

Somewhat surprisingly, the first fish to evolve digits still retained fin rays around them so these bones would not have been visible on the animal externally.

The earliest tetrapods (four-limbed animals with a backbone that eventually moved out of water and onto land) “experimented” with the number of digits, sometimes being found with six, seven or eight of them.

These earliest tetrapods were likely still living in the water. It wasn’t until tetrapods became truly terrestrial that the five-digit limb arrived. This arrangement most likely arose as a practical solution to weight bearing on land.

Long in the tooth

Does your mind wander when you brush your teeth? Well, have you ever considered how evolutionarily old your pearly whites are?

In 2022 a team of palaeontologists described isolated fossil fish teeth from Silurian age rocks in Guizhou province, China. This remarkable discovery pushed the minimum age of teeth back a further 14 million years from previous findings. This means our dentition now harks back to a whopping 439 million years ago.

That new fish, a very early jawed vertebrate, was named Qianodus duplicis and is only known from isolated specialised teeth known as “whorls”. A tooth whorl is a bizarre row of teeth that curls in on itself in a spiral pattern (most famously present in the buzz-saw shark, Helicoprion).

Nevertheless, the teeth in the Chinese jawed fish have a number of features found in other modern jawed vertebrates, which highlight their relevance in understanding the evolution of our very own gnashers. Chomp on that!

To “grow a spine” means to become emboldened and confident. The first animals to do just that must have surely been courageous to venture out into the perilous ancient seas 500 million years ago.

First, these worm-like animals evolved a “notochord” – a rod built of cartilage running along the back of the body. This enabled the attachment of segmented muscle blocks and a long tail extending beyond the anus. All animals with a notochord are called chordates, and includes everything from sea squirts to sea gulls, comprising more than 65,000 living species.

To get an idea of the first chordates, today we can look to animals such as the lancelet (known as Amphioxus or Branchiostoma). Lancelets look a bit like tiny, primitive fishes without fins. They swim by undulating their body from side to side. 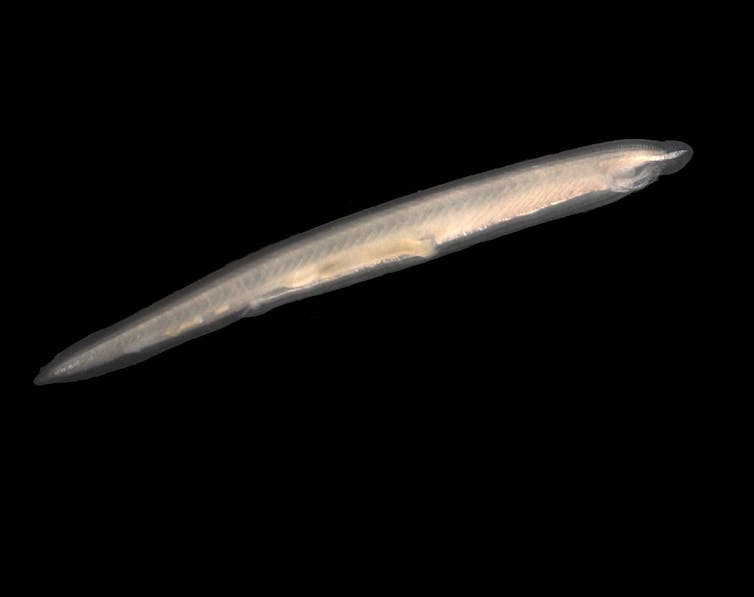 Next come those with well organised heads (craniates), and those in which the notochord is replaced by a backbone in adults (vertebrates).

A backbone is built of individual segmented bones (vertebrae) which fit together in a specific interlocking pattern. We have a few tantalising fossils representing the earliest known examples of vertebrates, such as Metaspriggina known from Canada, or Haikouichthys from China in rocks more than 500 million years old.

So, whether it be your large brain and broad pelvis from walking around upright, skull with a single opening and bony arch, your fingers, toes, teeth or spinal cord, we humans share many ancient features in our bodies.

And so, in the words of the poet and activist Maya Angelou, it may be worth remembering that we are more alike than we are unalike.