An image of the most distant known star in the universe has been captured by Nasaof the James Webb Space Telescope.

Named Earendel, after a character from JRR Tolkien’s “Lord of the Rings” prequel “The Silmarillion”, it lies nearly 28 billion light-years from Earth.

That’s more than 10 billion light-years further than the next most distant star astronomers have seen.

At such huge distances, experts can usually only make out entire galaxies, but a happy coincidence allowed them to spot Earendel with the Hubble Space Telescope and then observe it again with Webb on July 30.

By comparing Hubble’s image with one captured by NASA’s new $10bn (£7.4bn) Space Super Telescope, experts were able to find the elusive Earendel in the form of a faint red dot under a cluster of distant galaxies. 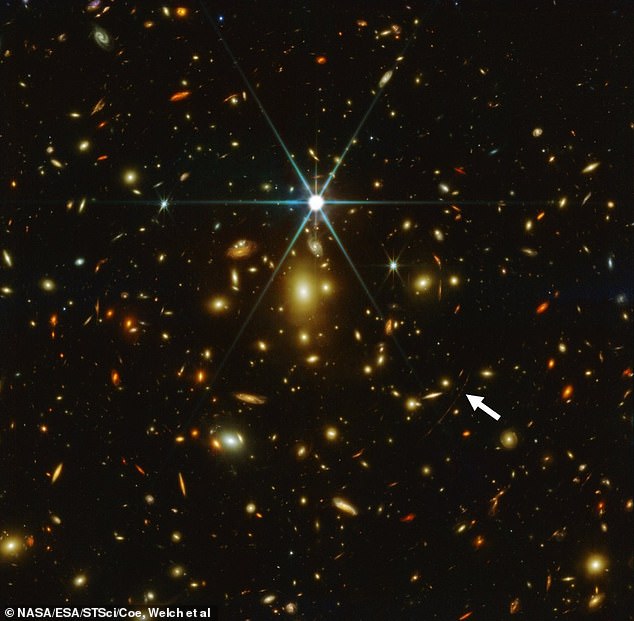 Far, far away: The farthest known star in the universe has been captured by NASA’s James Webb Space Telescope. Earendel is nearly 28 billion light years from Earth and is shown here in this image where the white arrow is 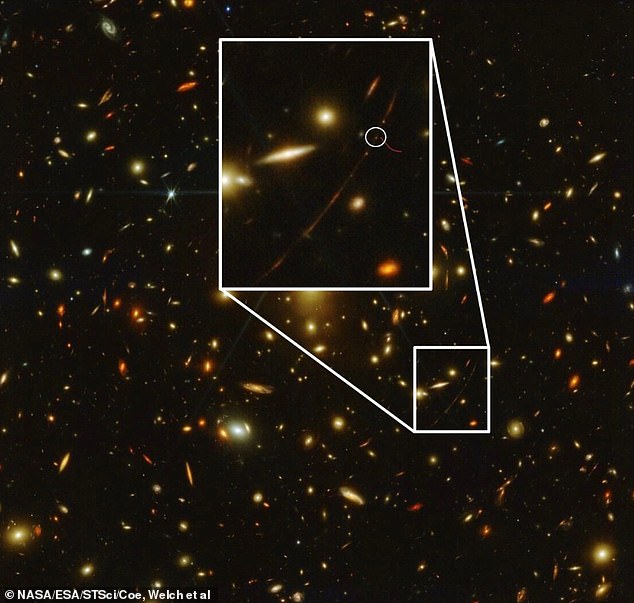 Circled: Experts were able to find Earendel as a faint red dot under a cluster of distant galaxies

WHAT IS THE GRAVITATIONAL LENS?

Gravitational lensing occurs when a massive galaxy or cluster of galaxies distorts the light emitted by a galaxy farther away.

This forms a very magnified, albeit very distorted, image.

This is because massive objects bend space-time around them, causing light to travel in a different path.

This theory was first proposed by Einstein in his theory of general relativity.

The star, whose light took 12.9 billion light-years to reach Earth, is so faint it would be hard to find without the help of Hubble – which images in visible ultraviolet light against Webb’s infrared.

This example of the two telescopes working side by side is exactly what NASA envisioned, although Webb is ultimately seen as the successor to the famous Hubble.

“We are thrilled to share the first JWST image of Earendel, the most distant known star in our universe, photographed and magnified by a huge cluster of galaxies,” said a group of astronomers using the Cosmic Spring JWST Twitter account. .

Their tweet refers to gravitational lensing, where light has been stretched into a long curve by the gravity of a cluster of galaxies closer to Earth.

This process magnified the Sunrise Arc galaxy where Earendel resides by a factor of more than 1,000, allowing astronomers to confirm with Webb that it is an individual star and not a cluster of hundreds.

The star is visible because it is perfectly aligned with the galaxy cluster to provide the maximum possible magnification, the experts said.

“No one has ever seen a star so magnified, let alone a galaxy.”

As light takes time to travel, this new image from Webb shows Earendel as it looked approximately 900 million years after the Big Bang.

Tolkien’s character Eärendil inspired the name Eearendel, according to Brian Welch, a doctoral student who led a team of astronomers at Johns Hopkins University in the discovery of the distant star.

“Once we were reasonably sure this object was a star, I started thinking about possible names,” he said.

‘Eärendil was one of the first things that came to mind, as he ended up sailing his ship Vingilot through the skies with the Silmaril on his forehead, becoming a star and symbol of hope on Middle earth.

“Digging deeper, I discovered that Tolkien’s original inspiration for the character was an Old English word Earendel, meaning Morning Star.”

Welch added, “The ‘Morning Star’ reference worked particularly well, because it’s a time period often referred to as Cosmic Dawn, so that kind of sealed the deal for me.” 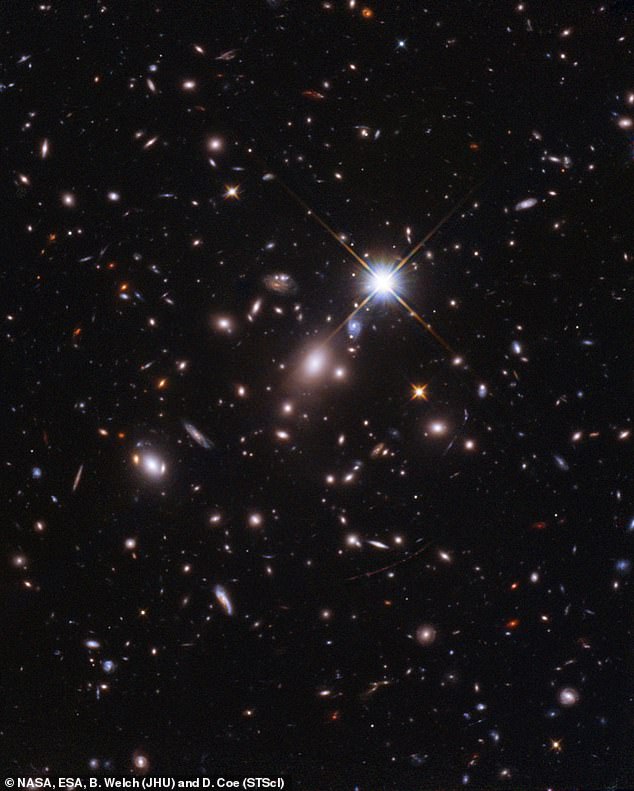 At such enormous distances, experts can usually only make out entire galaxies, but a happy coincidence allowed them to spot Earendel with the Hubble Space Telescope (pictured), then observe him again with James Webb on July 30. 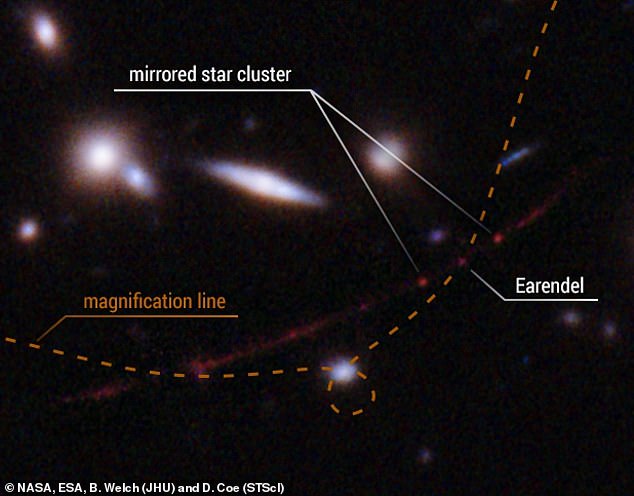 By comparing the Hubble image (pictured) with one captured by Webb, experts were able to find the elusive Earendel as a tiny reddish speck beneath a cluster of distant galaxies.

“The JWST was designed to study the first stars. Until recently, we assumed this meant star populations in early galaxies,” astronomers from the Space Telescope Science Institute in Maryland wrote in a recent paper on gravitational lensing.

“But in the past three years, three individual stars with strong lenses have been discovered.

Astronomers are hoping Webb’s next round of observations for the Space Telescope Science Institute team, which is scheduled for December, could reveal what Earendel and Sunrise Arc are made of.

“We’re all made of starstuff, but that stuff didn’t exist in the early universe,” Coe said.

“This is a rare opportunity to see if the heavy elements were there in this star 13 billion years ago.” 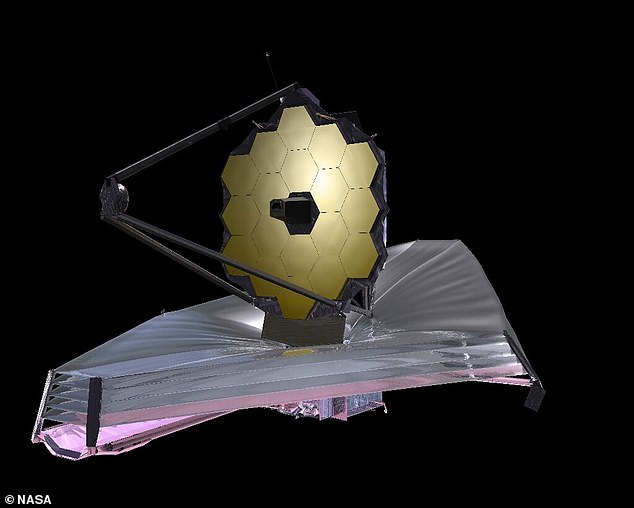 Because light takes time to travel, this new image from Webb (pictured) shows Earendel as it looked around 900 million years after the Big Bang

Last month, Webb’s dazzling and unprecedented images of a “stellar nursery”, a dying star covered in dust and a “cosmic dance” between a group of galaxies were revealed to the world for the first time. .

It ended months of feverish waiting and anticipation as people around the world were treated to the first batch of a treasure trove of images that will culminate in the first look at the dawn of the universe.

Webb’s infrared abilities mean he can ‘go back in time’ just 100-200 million years to the Big Bang, allowing him to snap photos of the very first stars to shine in the universe a while ago. more than 13.5 billion years old.

His first images of nebulae, an exoplanet and galaxy clusters sparked a huge celebration in the scientific world, on what was hailed as a “great day for humanity”.

Researchers will soon begin to learn more about the masses, ages, histories, and compositions of galaxies, as Webb seeks to explore the earliest galaxies in the universe.

The James Webb Telescope has been described as a “time machine” that could help unlock the secrets of our universe.

The telescope will be used to look back at the first galaxies born in the early universe more than 13.5 billion years ago, and observe the sources of stars, exoplanets and even moons and planets in our solar system.

The vast telescope, which has already cost more than $7bn (£5bn), is seen as the successor to the orbiting Hubble Space Telescope

The James Webb Telescope and most of its instruments have an operating temperature of around 40 Kelvin – about minus 387 Fahrenheit (minus 233 Celsius).

It is the largest and most powerful orbiting space telescope in the world, capable of observing 100 to 200 million years after the Big Bang.

The orbiting infrared observatory is designed to be about 100 times more powerful than its predecessor, the Hubble Space Telescope.

NASA likes to think of James Webb as a successor to Hubble rather than a replacement, as the two will be working in tandem for some time.

The Hubble Telescope was launched on April 24, 1990 via Space Shuttle Discovery from Kennedy Space Center in Florida. 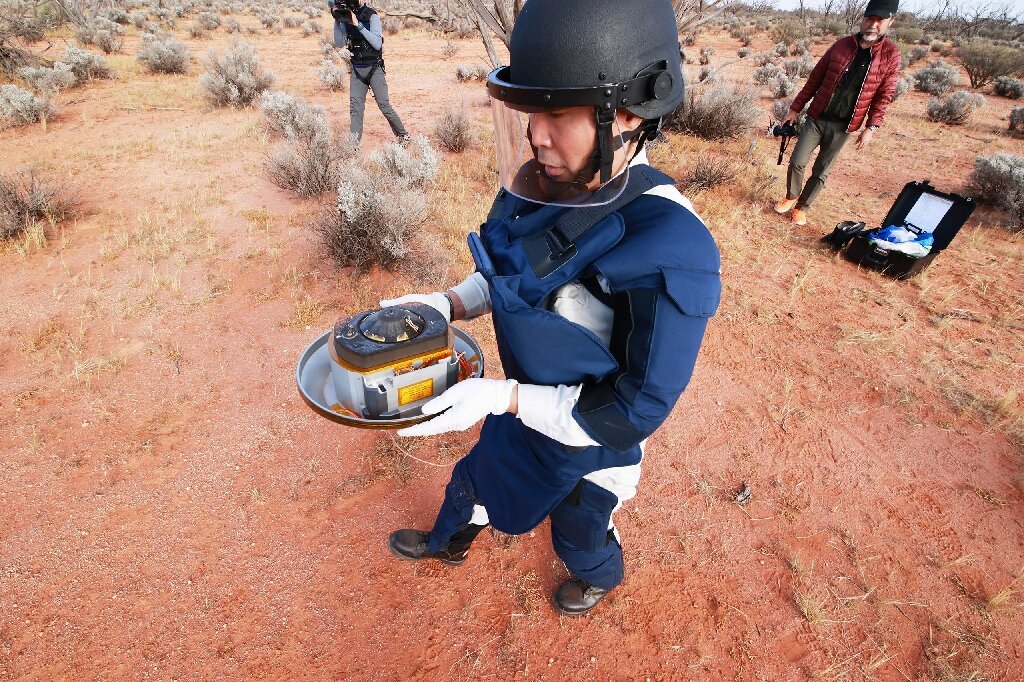