Depending on the season, the opening credits sequences for Night Court and That ‘70s Show ran between 30 and 40 seconds. Their new legasequels — NBC’s Night Court and Netflix’s That ‘90s Show — use intros that top out around 15 seconds, with updated versions of familiar theme songs that are either much less intricate (Night Court) or vastly sped up (That ‘90s Show).

On the one hand, this should not be a surprise. Sitcom credits have gotten drastically shorter since That ‘70s Show debuted 25 years ago, particularly on broadcast network TV, where ad breaks keep eating into the time for the actual content of each episode. Still, something feels off in both cases, in a way that carries through to most of what follows the familiar guitar riffs. Each centers around children of the originals’ main characters, and each brings back some familiar faces in supporting roles, yet neither feels quite right. 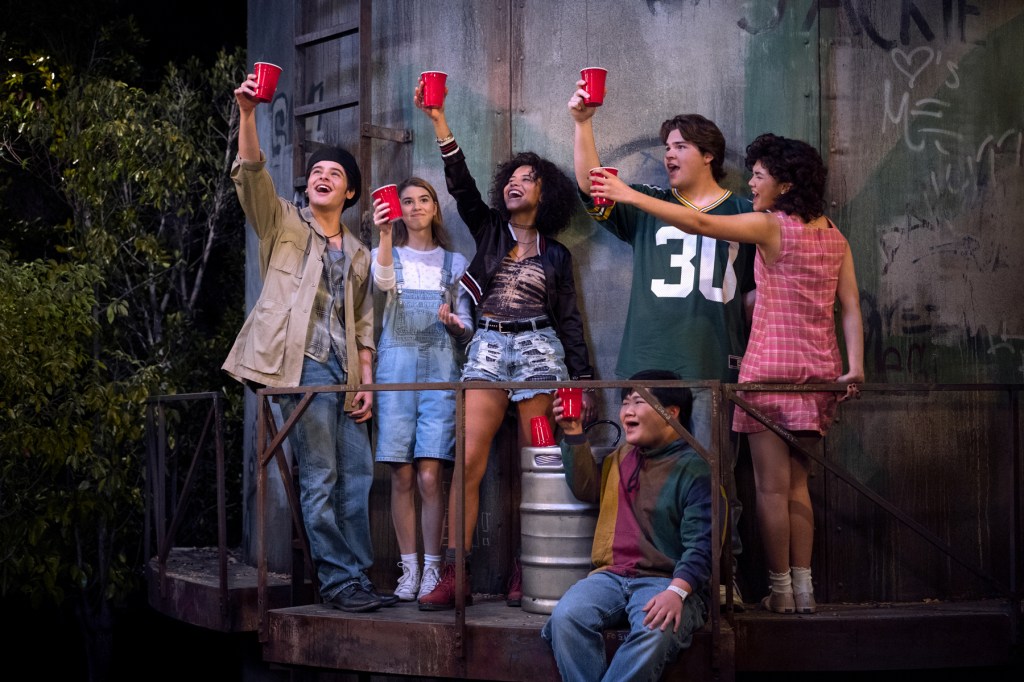 Let’s start with That ‘90s Show, which just premiered its first season on Netflix. This one has the involvement of ‘70s Show creators Bonnie and Terry Turner, plus their daughter Lindsey Turner, though the showrunner and head writer is Gregg Mettler, who wrote for the original series for many years. The series begins in the summer of 1995, about 18 years since the start of the series. Our main character this time is Leia Forman (Callie Haverda), daughter of Eric (Topher Grace) and Donna (Laura Prepon), and granddaughter of Red (Kurtwood Smith) and Kitty (Debra Jo Rupp). Frustrated and lonely after a lifetime of being a good girl, she decides to spend the summer at Red and Kitty’s so she can finally have friends and experience some adolescent rebellion. Her new crew includes next-door neighbors Gwen (Ashley Aufderheide) and Nate (Maxwell Acee Donovan), Nate’s smart girlfriend Nikki (Sam Morelos), the sarcastic and semi-closeted Ozzie (Reyn Doi), and Jay (Mace Coronel) — aka the son of Kelso (Ashton Kutcher) and Jackie (Mila Kunis), who keep getting divorced and remarried every few years.

The kids from the original show are recurring players at best — Grace, Kutcher, and Kunis are only in the premiere, and Prepon and Wilmer Valderrama pop up in a few additional episodes(*) — which makes a good degree of sense. The focus is on this next generation, plus Smith and Rupp were always the most reliable laugh-getters of the original show, and have those muscles still in top form all these years later. But the new kids are largely forgettable, with Ashley Aufderheide the only one whose facility with verbal or physical comedy seems anywhere in the ballpark of the old group. Because while That ‘70s Show was never a great comedy, its young ensemble was pretty remarkable. Grace never turned out to be the next Michael J. Fox, career-wise, but his timing and delivery were always impeccable, and Kutcher, Kunis and the others brought a lot more than what was necessarily on the page. No one is actively bad this time around, but nobody’s elevating some pretty limp punchlines, either. Every now and then, Smith will get to go on a good rant — “Down in Hell, there’s this room in the way back where the Devil craps fire into your mouth,” Red declares. “That’s the DMV!”— but not nearly often enough.

(*) Danny Masterson is, thankfully, nowhere to be seen, nor is Hyde ever mentioned.

The studio audience, meanwhile — or, perhaps, recordings of the studio audience from That ‘70s Show — goes wild whenever someone from the original show appears, whether it’s a full castmember like Valderrama, a recurring player like Don Stark or Tommy Chong, or even an actor whose presence I am embargoed from naming, but who appeared a grand total of six times, and who is much better known for later work. But the audience’s applause is only occasionally rewarded by all the returnees. Grace in particular seems to have either forgotten everything he knows about acting in a multi-camera sitcom after years in movies and now two and a half seasons on ABC’s single-cam Home Economics, or he’s just doing the cameo out of a sense of obligation.

The former seems more likely, simply because multi-cam has largely fallen out of fashion outside of Disney Channel and Nick sitcoms for kids and tweens. The vast majority of comedies on cable and streaming are single-cam — some pure comedies like What We Do in the Shadows, others blends of humor and pathos like Reservation Dogs — and broadcast network TV is even experiencing something of a sitcom renaissance, with two genuine hits in Abbott Elementary and Ghosts, both of them single-cam(*). There just aren’t a lot of people, either as writers or as actors, who are still adept and well-practiced at slinging set-ups and punchlines on a stage in front of a live studio audience. That Smith, Rupp and some of the other adults can still do it is impressive, and there are occasional inspired bits, like a stoned Leia imagining her grandparents as 8-bit video game characters, or a Beverly Hills, 90210 parody with one of the original actors in a deliberately bad wig. It’s just not enough to keep That ‘90s Show from feeling like it’s being presented in a foreign language that only a few people involved can speak fluently, rather than phonetically sounding out the words.

(*) That said, it appears there’s still an appetite for the form from the audience. Tuesday night’s series premiere of Night Court was NBC’s most-watched comedy debut since the return of Will & Grace in 2017. At this rate, can a Caroline in the City revival be far behind? 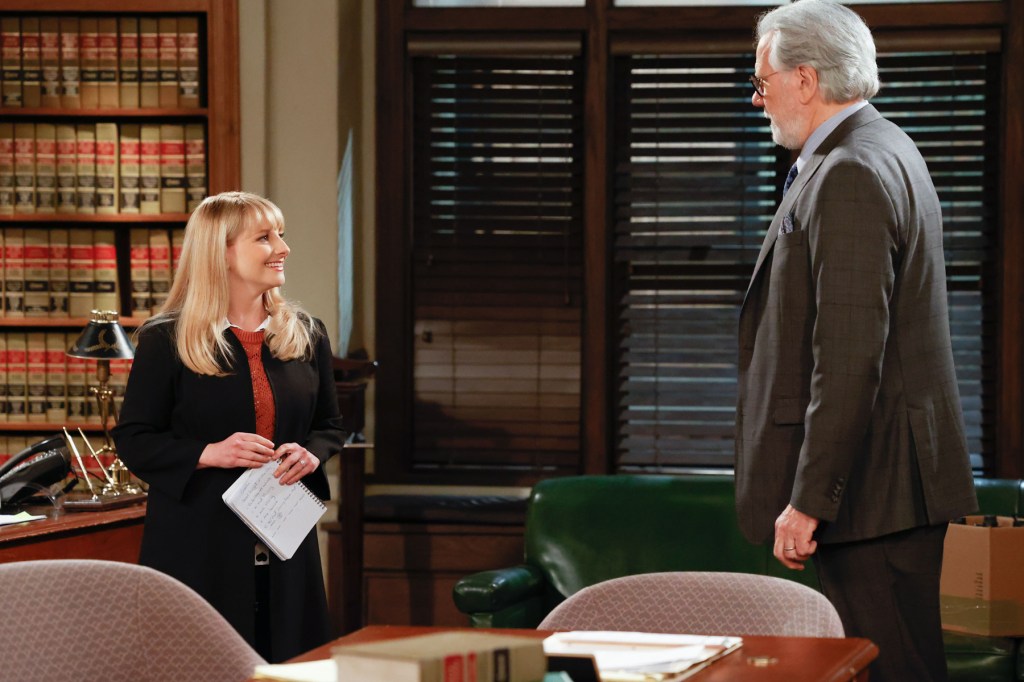 The two main actors on Night Court are themselves well-versed in the rhythms of multi-cam. Star and executive producer Melissa Rauch spent a decade as Bernadette on The Big Bang Theory, and John Larroquette won four Emmys for his role on the original Night Court, and spent another four seasons fronting his own self-titled NBC sitcom. They are, not coincidentally, the main reasons to check out the sequel series, which has occasional moments, and one pretty good episode (the fifth, set on the night a blood moon brings particular craziness to the court) that genuinely evokes the anarchic feel of the Harry Anderson-led version.

Rauch, using her normal speaking voice rather than Bernadette’s high-pitched squeak, is Abby Stone, daughter of Anderson’s Harry. After growing up and working upstate, she’s moved to New York to preside over her dad’s old courtroom, and recruits Larroquette’s misanthropic ex-prosecutor Dan Fielding to come back to work, this time representing the defendants.

It’s a reasonable set-up. Dan has had to be significantly transformed from the misogynist user of women he was in the Eighties and Nineties, and if it feels largely like a new character, Larroquette remains incredibly well-suited to the specific demands and challenges of multi-cam. Rauch, meanwhile, is gregarious and enthusiastic enough to evoke Anderson. She’s unfortunately hampered by the fact that Dan is no longer the only character who doesn’t want to be there. Both court clerk Neil (Kapil Talwalkar) and prosecutor (India de Beaufort) clearly have their sights set on better things, which leaves bailiff Gurgs (Lacretta) as the only character other than Abby who seems to be genuinely enjoying herself in this setting.

Half the fun of the old show was the sense that this was all a ridiculous party that the viewer got to visit once a week. Without, say, the presence of a gleeful hype man like the late Charles Robinson as Harry’s clerk Mac, that infectious spirit is absent. So when things do get more cartoonish — say, Neil dressing up like an extra from Grease in a misguided attempt to endear himself to Abby’s mom (Murphy Brown alum Faith Ford, also demonstrating well-honed multi-cam chops in a guest appearance) — it feels dumb in a way it wouldn’t have 30-plus years ago.

Multi-cam was a hard, unforgiving beast to tame even back in the Nineties when there were so many of them. It’s even tougher now that the format has dwindled so much. Credit these two for at least offering genuine ties to the originals — as opposed to the deservedly short-lived, entirely unrelated That ‘80s Show — but like most of the revival and reboot trend that has consumed TV over the last decade, they exist much more to exploit a familiar brand than because they’re good enough to exist on their own merits. But, hey, at least someone in the Night Court pilot got to say, “Maybe I really am Gary Buttmouth!”

E-Bike Rebates May Be Coming to DC Residents