The Carina star-forming region imaged by the JWST. Credit: NASA

It is no exaggeration to say the James Webb Space Telescope (JWST) represents a new era for modern astronomy.

Launched on December 25 last year and fully operational since July, the telescope offers glimpses of the universe that were inaccessible to us before. Like the Hubble Space Telescope, the JWST is in space, so it can take pictures with stunning detail free from the distortions of Earth’s atmosphere.

However, while Hubble is in orbit around Earth at an altitude of 540km, the JWST is 1.5 million kilometers distant, far beyond the moon. From this position, away from the interference of our planet’s reflected heat, it can collect light from across the universe far into the infrared portion of the electromagnetic spectrum.

This ability, when combined with the JWST’s larger mirror, state-of-the-art detectors, and many other technological advances, allows astronomers to look back to the universe’s earliest epochs.

As the universe expands, it stretches the wavelength of light traveling towards us, making more distant objects appear redder. At great enough distances, the light from a galaxy is shifted entirely out of the visible part of the electromagnetic spectrum to the infrared. The JWST is able to probe such sources of light right back to the earliest times, nearly 14 billion years ago.

The Hubble telescope continues to be a great scientific instrument and can see at optical wavelengths where the JWST cannot. But the Webb telescope can see much further into the infrared with greater sensitivity and sharpness.

Let’s have a look at ten images that have demonstrated the staggering power of this new window to the universe. 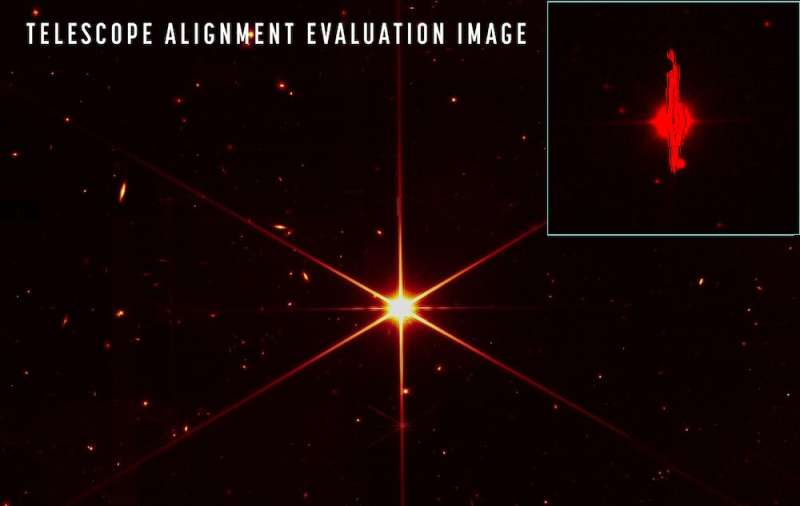 Left: The first publicly released alignment image from the JWST. Astronomers jumped on this image to compare it to previous images of the same part of sky like that on the right from the Dark Energy Camera on Earth. Credit: NASA/STScI/LegacySurvey/C. Jacobs

Despite years of testing on the ground, an observatory as complex as the JWST required extensive configuration and testing once deployed in the cold and dark of space.

One of the biggest tasks was getting the 18 hexagonal mirror segments unfolded and aligned to within a fraction of a wavelength of light. In March, NASA released the first image (centered on a star) from the fully aligned mirror. Although it was just a calibration image, astronomers immediately compared it to existing images of that patch of sky—with considerable excitement. 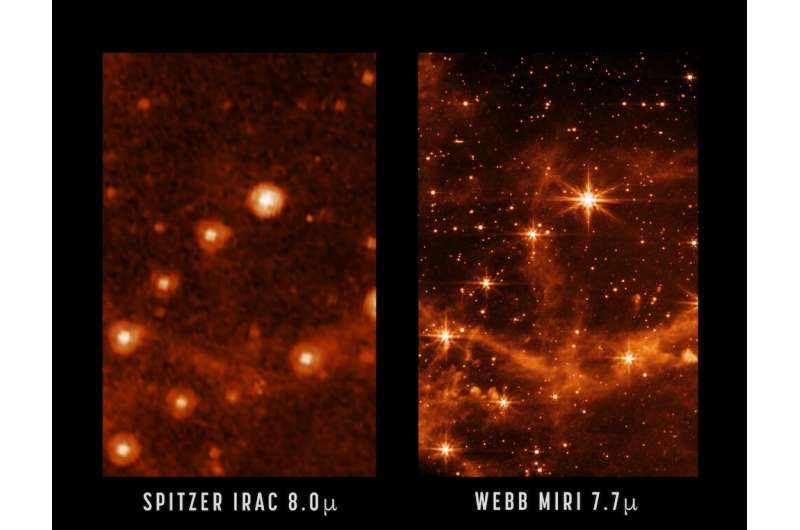 This image shows a portion of the ‘Pillars of Creation’ in the infrared (see below); on the left taken with the Spitzer Space Telescope, and JWST on the right. The contrast in depth and resolution is dramatic. Credit: NASA/JPL-Caltech (left), NASA/ESA/CSA/STScI (right)

This early image, taken while all the cameras were being focused, clearly demonstrates the step change in data quality that JWST brings over its predecessors.

On the left is an image from the Spitzer telescope, a space-based infrared observatory with an 85cm mirror; the right, the same field from JWST’s mid-infrared MIRI camera and 6.5m mirror. The resolution and ability to detect much fainter sources is on show here, with hundreds of galaxies visible that were lost in the noise of the Spitzer image. This is what a bigger mirror situated out in the deepest, coldest dark can do. 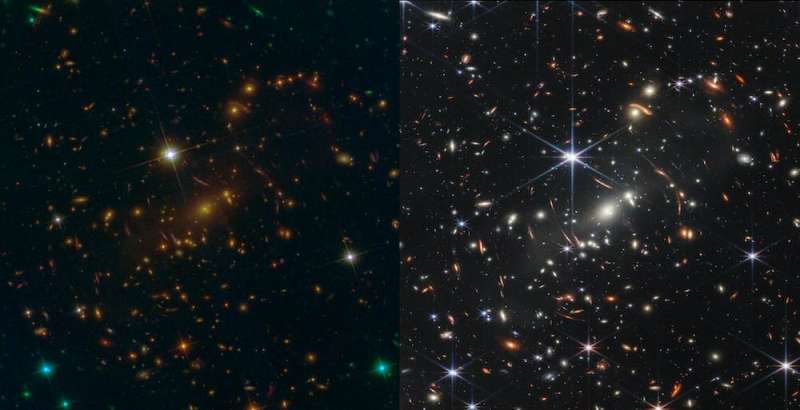 SMACS 0723 galaxy cluster – from Hubble on the left, and JWST on the right. Hundreds more galaxies are visible in JWST’s infrared image. Credit: NASA/STSci

The galaxy cluster with the prosaic name of SMACS J0723.3–7327 was a good choice for the first color images released to the public from the JWST.

The field is crowded with galaxies of all shapes and colors. The combined mass of this enormous galaxy cluster, over 4 billion light years away, bends space in such a way that light from distant sources in the background is stretched and magnified, an effect known as gravitational lensing.

These distorted background galaxies can be clearly seen as lines and arcs throughout this image. The field is already spectacular in Hubble images (left), but the JWST near-infrared image (right) reveals a wealth of extra detail, including hundreds of distant galaxies too faint or too red to be detected by its predecessor. 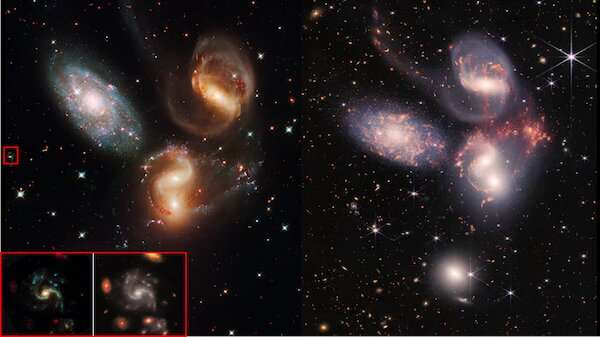 Hubble (l) and JWST (r) images of the group of galaxies known as ‘Stephan’s Quintet’. The inset shows a zoom-in on a distant background galaxy. Credit: NASA/STScI

These images depict a spectacular group of galaxies known as Stephan’s Quintet, a group that has long been of interest to astronomers studying the way colliding galaxies interact with one another gravitationally.

On the left we see the Hubble view, and the right the JWST mid-infrared view. The inset shows the power of the new telescope, with a zoom in on a small background galaxy. In the Hubble image we see some bright star-forming regions, but only with the JWST does the full structure of this and surrounding galaxies reveal itself.

5. The Pillars of Creation

The so-called Pillars of Creation is one of the most famous images in all of astronomy, taken by Hubble in 1995. It demonstrated the extraordinary reach of a space-based telescope.

It depicts a star-forming region in the Eagle Nebula, where interstellar gas and dust provide the backdrop to a stellar nursery teeming with new stars. The image on the right, taken with the JWST’s near-infrared camera (NIRCam), demonstrates a further advantage of infrared astronomy: the ability to peer through the shroud of dust and see what lies within and behind. 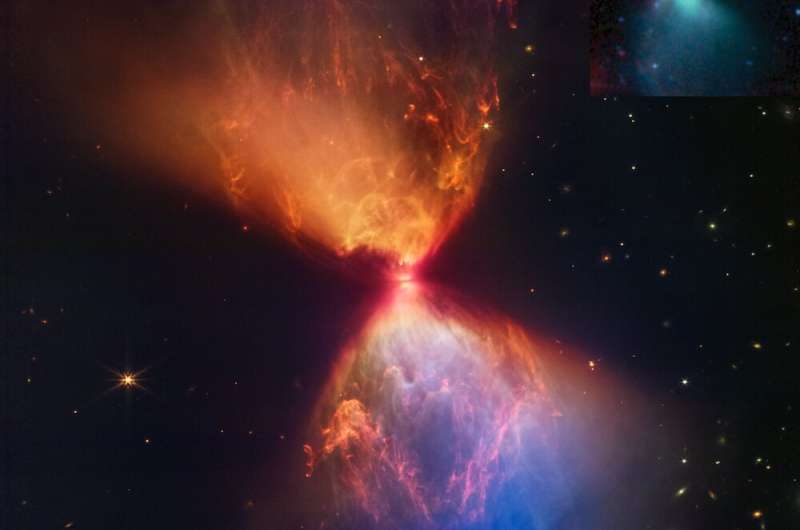 The ‘hourglass protostar’, a star still in the process of accreting enough gas to begin fusing hydrogen. Inset: A much lower resolution view from Spitzer. Credit: NASA/STScI/JPL-Caltech/A. Tobin

This image depicts another act of galactic creation within the Milky Way. This hourglass-shaped structure is a cloud of dust and gas surrounding a star in the act of formation—a protostar called L1527.

Only visible in the infrared, an “accretion disk” of material falling in (the black band in the center) will eventually enable the protostar to gather enough mass to start fusing hydrogen, and a new star will be born.

In the meantime, light from the still-forming star illuminates the gas above and below the disk, making the hourglass shape. Our previous view of this came from Spitzer; the amount of detail is once again an enormous leap ahead. 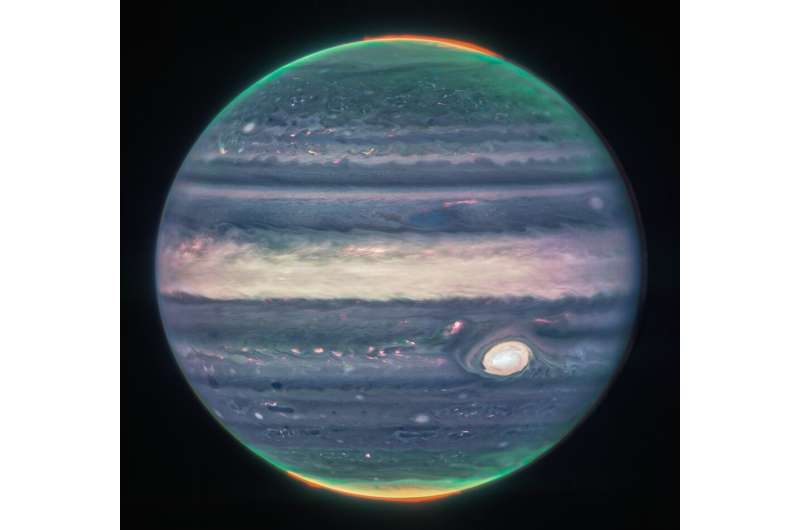 An infrared view of Jupiter from the JWST. Note the auroral glow at the poles; this is caused by the interaction of charged particles from the sun with Jupiter’s magnetic field. Credit: NASA/STScI

The Webb telescope’s mission includes imaging the most distant galaxies from the beginning of the universe, but it can look a little closer to home as well.

Although JWST cannot look at Earth or the inner Solar System planets—as it must always face away from the Sun—it can look outward at the more distant parts of our Solar System. This near-infrared image of Jupiter is a beautiful example, as we gaze deep into the structure of the gas giant’s clouds and storms. The glow of auroras at both the northern and southern poles is haunting.

This image was extremely difficult to achieve due to the fast motion of Jupiter across the sky relative to the stars and because of its fast rotation. The success proved the Webb telescope’s ability to track difficult astronomical targets extremely well. 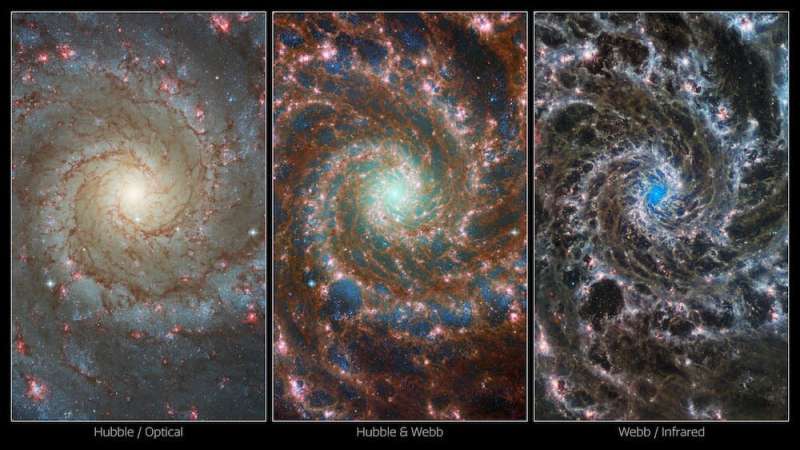 Hubble visible light (l), JWST infrared (r) and combined (middle) images of the ‘Phantom Galaxy’ M74. The ability to combine visible light information about stars with infrared images of gas and dust allow us to probe such galaxies in exquisite detail. Credit: ESA/NASA

These images of the so-called Phantom Galaxy or M74 reveal the power of JWST not only as the latest and greatest of astronomical instruments, but as a valuable complement to other great tools. The middle panel here combines visible light from Hubble with infrared from Webb, allowing us to see how starlight (via Hubble) and gas and dust (via JWST) together shape this remarkable galaxy.

Much JWST science is designed to be combined with Hubble’s optical views and other imaging to leverage this principle. 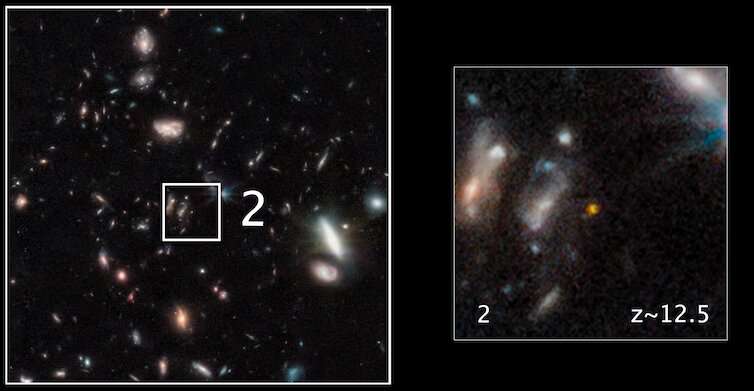 A ‘zoom in’ on a galaxy from one of the universe’s earliest epochs, when the universe was only about 300 million years old (the small red source visible in the center of the right panel). Galaxies at this distance are impossible to detect in visible light as their emitted radiation has been ‘redshifted’ far into the infrared. NASA/STScI/C. Jacobs

Although this galaxy—the small, red blob in the right image—is not among the most spectacularly picturesque our universe has to offer, it is just as interesting scientifically.

This snapshot is from when the universe was a mere 350 million years old, making this among the very first galaxies ever to have formed. Understanding the details of how such galaxies grow and merge to create galaxies like our own Milky Way 13 billion years later is a key question, and one with many remaining mysteries, making discoveries like this highly sought after.

It is also a view only the JWST can achieve. Astronomers did not know quite what to expect; an image of this galaxy taken with Hubble would appear blank, as the light of the galaxy is stretched far into the infrared by the expansion of the universe. 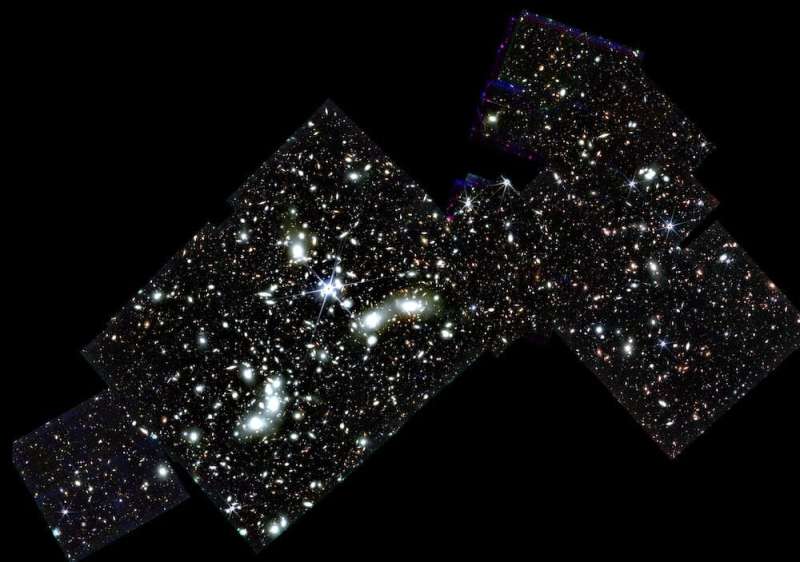 An image of the galaxy cluster Abell 2744 created by combining many different JWST exposures. In this tiny part of the sky (a fraction of a full Moon) almost every one of the thousands of objects shown is a distant galaxy. Credit: Lukas Furtak (Ben-Gurion University of the Negev) from images from the GLASS/UNCOVER teams

This image (click here for full view) is a mosaic (many individual images stitched together) centered on the giant Abell 2744 galaxy cluster, colloquially known as “Pandora’s Cluster.” The sheer number and variety of sources that the JWST can detect is mind boggling; with the exception of a handful of foreground stars, every spot of light represents an entire galaxy.

In a patch of dark sky no larger than a fraction of the full moon there are umpteen thousands of galaxies, really bringing home the sheer scale of the universe we inhabit. Professional and amateur astronomers alike can spend hours scouring this image for oddities and mysteries.

Over the coming years, JWST’s ability to look so deep and far back into the universe will allow us to answer many questions about how we came to be. Just as exciting are the discoveries and questions we can not yet foresee. When you peel back the veil of time as only this new telescope can, these unknown unknowns are certain to be fascinating.

Provided by
The Conversation

This article is republished from The Conversation under a Creative Commons license. Read the original article.

Citation:
Ten times this year the Webb telescope blew us away with new images of our stunning universe (2022, December 23)
retrieved 23 December 2022
from https://phys.org/news/2022-12-ten-year-webb-telescope-blew.html

This document is subject to copyright. Apart from any fair dealing for the purpose of private study or research, no
part may be reproduced without the written permission. The content is provided for information purposes only.