While the galaxy has the rather un-glamorous name of NGC 7469, it’s been a fascinating subject to study.

JWST has peered into NGC 7469 as part of a survey to understand star formation, the growth of supermassive black holes, and the way galaxies gravitationally interact and merge across the vast gulfs of space and time.

NGC 7469 is also pretty special. It has elegant, beautiful spiral arms that we can see along their full extent, thanks to a quirk of orientation: The flat of the galactic plane is facing us almost directly, giving us a stunning view of the galaxy’s structure.

The galaxy also has a very bright center, especially when it comes to infrared radiation.

This is because the supermassive black hole around which the entire galaxy orbits is active: It’s surrounded by material that’s falling, or accreting, onto the black hole, a process that generates a great deal of light as gravity and friction heat the material causing it to glow. 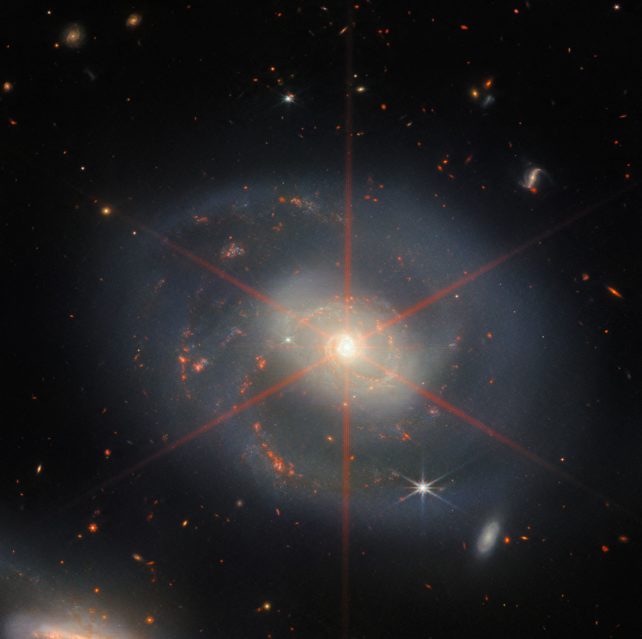 At a distance of about 1,500 light-years from NGC 7469’s galactic center is another bright ring featuring furious star formation activity, known as starburst. Because we can see the galaxy so clearly, scientists can study it to better understand the link between a starburst ring and an active galactic nucleus.

Like the galactic nucleus, starburst rings glow brightly in infrared, the wavelength range in which JWST views the Universe in such spectacular detail. Its observations of galaxies like NGC 7469 are expected to yield unprecedented insight into these processes and how they are linked.

Scientists have already found new clusters of star formation and direct evidence that dust is being destroyed very close to the galactic nucleus – showing that the activity is affecting the galaxy around it.

They also found that highly ionized, diffuse atomic gas is blowing out from the galactic center at around 6.4 million kilometers (4 million miles) per hour. Shocks from this wind, a recent paper currently in preprint found, are not influencing the starburst ring. 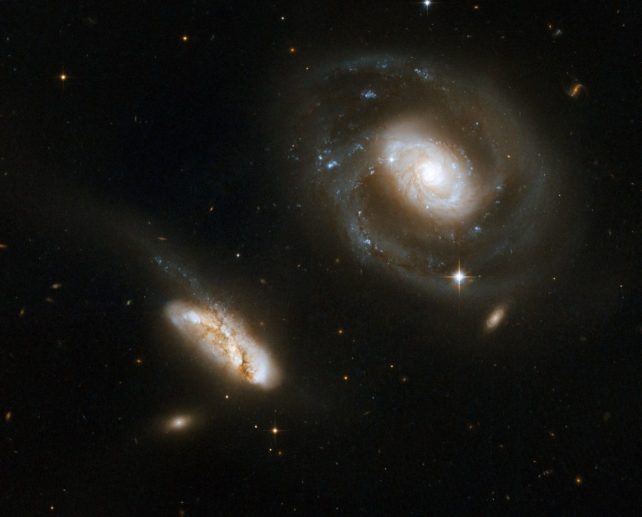 Another galaxy is just off to the bottom left corner of JWST’s image. That’s IC 5283, and it’s locked in a gravitational dance with NGC 7469. Collectively, the two galaxies are known as Arp 298. You can see enhanced regions of bright red on the edge of NGC 7469 closest to IC 5283; that’s likely because the larger galaxy is slurping nourishing star-forming gas from its smaller companion.

The starburst and possibly even the galactic nucleus activity in NGC 7469 are thought to be the result of the interaction between the two galaxies.

The large six-pointed feature that dominates the image is JWST’s diffraction spikes, an artifact generated by the physical structure of the telescope. So it’s not actually real … but it sure looks pretty.

Inside the House of Indies: Holiday Event Day 5 - Nintendo Switch - Nintendo of America