Around 120 million years ago, four-winged dinosaurs roughly the size of crows called Microraptors stalked the ancient woodlands of what is now China.

While researchers have studied several Microraptor specimens, there’s still a lot we don’t know about these feathered bird-like creatures – including what and how they ate.

Now an incredibly rare fossil has revealed the preserved final meal of one individual: and unexpectedly, it was a mammal.

“At first, I couldn’t believe it,” says vertebrate paleontologist Hans Larsson from McGill University in Canada, who found the fossil while looking through samples at museum collections in China.

“There was a tiny rodent-like mammal foot about a centimeter long perfectly preserved inside a Microraptor skeleton.” 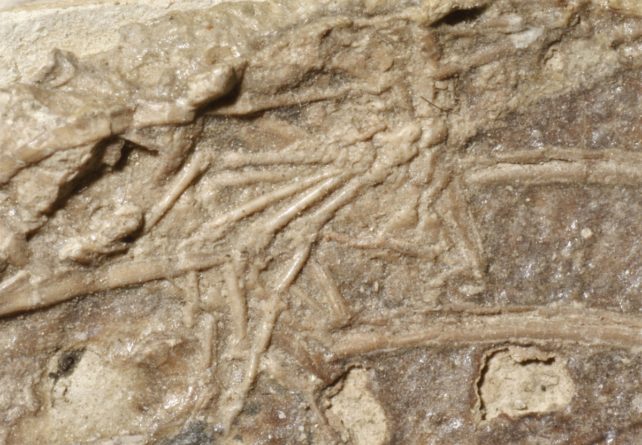 Close up photograph of the mammal foot among the ribs of Microraptor. (Hans Larsson/McGill University)

“These finds are the only solid evidence we have about the food consumption of these long extinct animals – and they are exceptionally rare,” Larsson adds.

The first Microraptor fossil was found in Liaoning, China, in 2000. There are three known species, which lived in the early Cretacious period, and the fossil in question belongs to Microraptor zhaoianus. 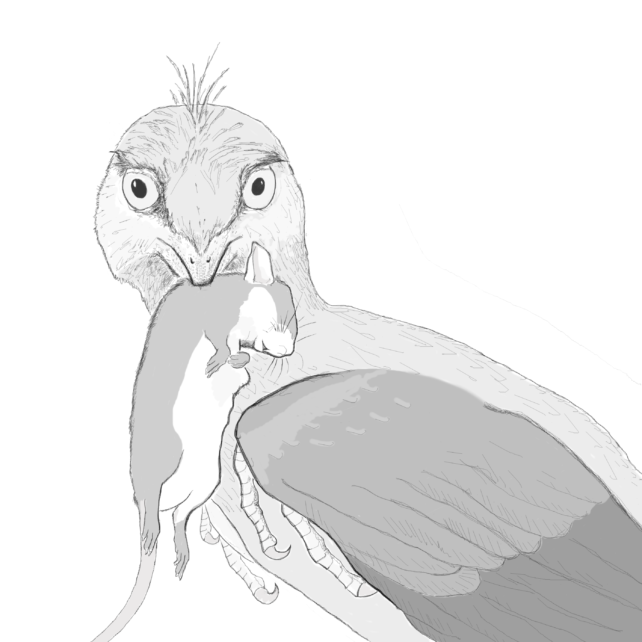 Illustration of a Microraptor with a rodent. (Hans Larsson)

The Microraptors were among some of the first dinosaurs that were found with fully feathered wings on both its arms and legs – and alongside the famous feathered dinosaur Archaeopteryx, have reinforced theories that propose modern birds are closely related to categories of dinosaur.

While some studies have shown that Microraptors would have been capable of powered flight, it’s generally thought that they mostly used their wings to glide.

Up until now, the small dinosaurs had only been confirmed to eat birds, fish, and lizards, and they were thought to be arboreal hunters that glided down from the trees to capture prey. The latest discovery expands on that idea, suggesting they were more likely to be opportunistic eaters that both scavenged and preyed upon a variety of vertebrates.

“We already know of Microraptor specimens preserved with parts of fish, a bird, and a lizard in their bellies. This new find adds a small mammal to their diet, suggesting these dinosaurs were opportunistic and not picky eaters,” says Larsson.

The latest discovery takes that number to 21.

Understanding more about their diets isn’t just fascinating for those of us trying to imagine how the world looked 120 million years ago, it also provides important clues for the researchers working hard to understand exactly how dinosaurs left the land for the sky, and evolved into the true birds we see today.

“Knowing that Microraptor was a generalist carnivore puts a new perspective on how ancient ecosystems may have worked and a possible insight into the success of these small, feathered dinosaurs,” says Larsson.

The research has been published in The Journal of Vertebrate Paleontology.

Steam Winter Sale: best deals, how long is the sale, and more