A jury in Los Angeles found rapper Tory Lanez guilty on all three charges in the shooting of hip-hop star Megan Thee Stallion on July 12, 2020 in the Hollywood Hills.

ABC News has reached out to Lanez’ attorneys and a request for comment was not immediately returned.

Megan Thee Stallion, whose legal name is Megan Pete, shared her account of the incident in an emotional testimony last week and accused Lanez of shooting her following an argument.

Pete testified that on the night of July 12, 2020, she got out of a car following an argument with Lanez and as she walked away, she turned her head and saw him with a gun, according to a reporter with Los Angeles ABC station KABC, who was in the courtroom.

“He was holding the gun pointing at me,” she said, according to KABC, and claimed that he said “dance b—-” and fired his gun, injuring both her feet.

“I froze … I felt shocked,” she said. “I wasn’t really sure if this was happening. … I looked at the ground and saw the blood … everyone was shocked.”

Lanez, a popular rapper whose legal name is Daystar Peterson, was initially charged in October 2020 with one felony count each of assault with a semi-automatic firearm (personal use of a firearm) and carrying a loaded, unregistered firearm in a vehicle, according to charging documents obtained by ABC News. “Personal use of a firearm” is not a separate charge but a sentencing enhancement linked to the first count that could increase Lanez’s possible sentence. 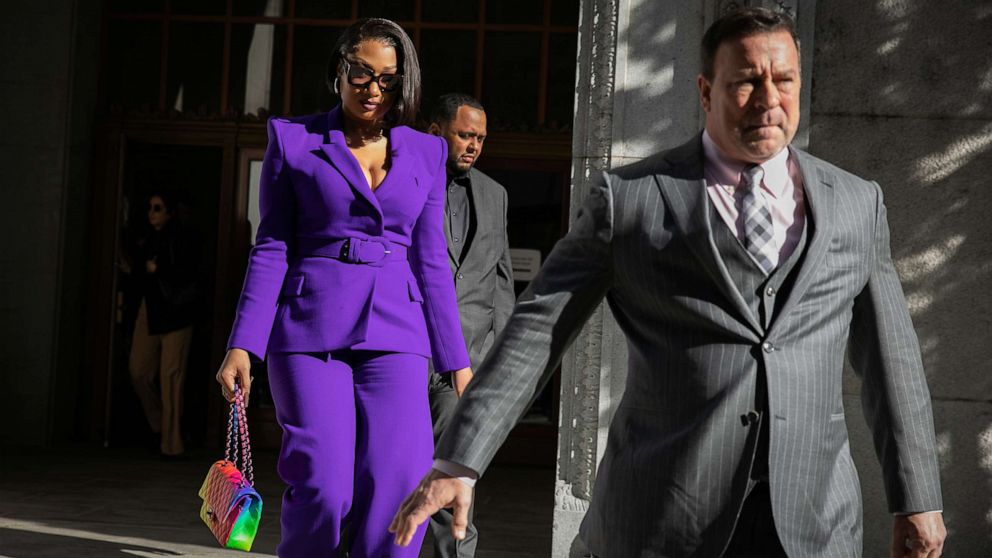 Megan Thee Stallion whose legal name is Megan Pete makes her way from the Hall of Justice to the courthouse to testify in the trial of Rapper Tory Lanez for allegedly shooting her on Dec. 13, 2022, in Los Angeles.

He was charged earlier this month with an additional felony count of discharging a firearm with gross negligence, the Los Angeles County District Attorney’s Office confirmed to ABC News.

Lanez, who chose not to take the witness stand during the trial, pleaded not guilty to all three charges.

His defense attorneys argued during the trial that their client was not the shooter.

“It’s a very unfortunate case,” Lanez’s defense attorney, George Mgdesyan, said during closing arguments on Wednesday, according to KABC. “Someone got shot. Megan Pete got shot … my client is not the shooter … my client is being falsely accused.”

The jury began deliberations on Thursday.

This is a developing story. Please check back for updates.