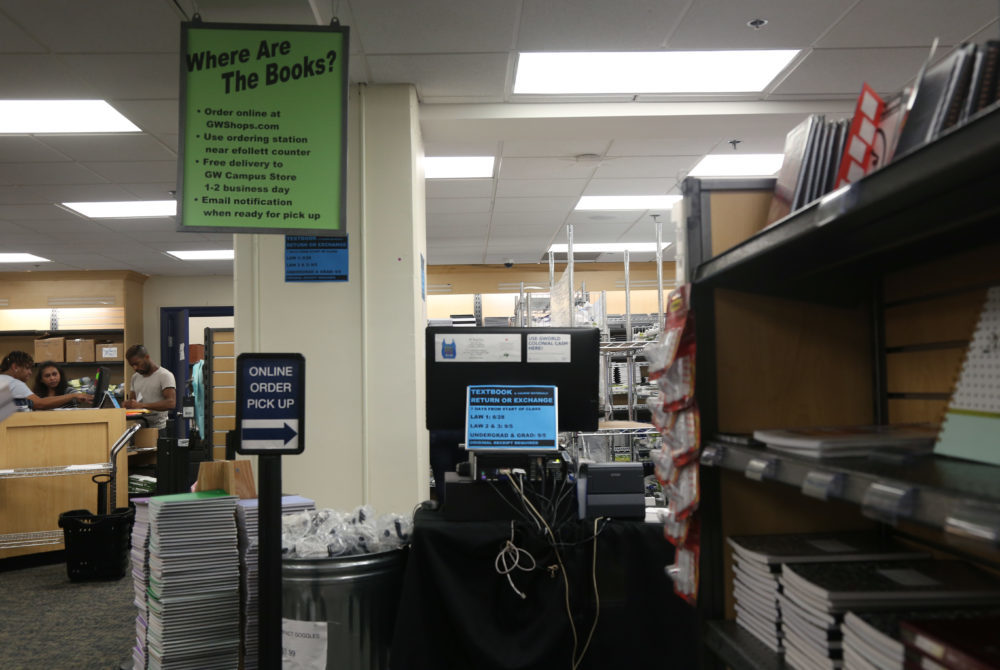 The release states the store’s expanded space will allow the University to host book readings and lectures in the future and help to “activate” the Foggy Bottom campus with additional retail.

Officials will relocate the GW Campus Store from the University Student Center basement to a two-story space inside the new 2100 Pennsylvania Ave. building next fall, according to a Wednesday release.

The store will cover more than 16,000 square feet – nearly double the size of the current shop in the student center basement – and serve as the “retail anchor tenant” of the newly constructed 2100 Penn building, which sits upon University-owned land leased to real estate investment firm Boston Properties. The building, across the street from District House and the student center, will feature “expanded merchandise,” including a children’s book section, a technology store with Apple products and a GW Information Technology help desk.

The release states the store’s expanded space will allow the University to host book readings and lectures in the future and help to “activate” the Foggy Bottom campus with additional retail. Revenues from the building’s long-term lease will create the opportunity to fund new academic initiatives, the release states.

“Establishing a more visible and functional Campus Store aligns well with the academic mission and continuing to enhance the student experience,” Bruno Fernandes, the University’s vice president, CFO and treasurer, said in the release.

The statement did not specify what could take the place of the current Campus Store in the basement of the student center.

Officials razed Rice Hall, which was formerly located on the block, and the former 2100 Penn building in 2017 to make way for the new commercial property, which forced local businesses housed in the building to relocate or shut down. Two years later, officials signed a 75-year contract to lease the new 2100 Penn property to Boston Properties for $194.4 million.

Jake Strohman, the executive vice president of the Washington D.C. branch of Boston Properties, said the firm is excited to ink the Campus Store deal with the University and open the “trophy-quality” space.

“The GW Campus Store is a perfect complement to the bevy of other options along this corridor, extending from the Foggy Bottom Metro stop to the Western Market,” Strohman said in the release. “We’re quite proud of the retail offerings provided and curation we’ve led to make this corridor a thriving success.”

The same year, international law firm WilmerHale agreed to lease 288,000 square feet from the building. The firm has represented former President Donald Trump’s daughter Ivanka Trump and her husband Jared Kushner and previously employed Robert Mueller, who was selected to lead the investigation into Russian election interference as special counsel during Trump’s term.

Officials and Boston Properties also worked to open a mixed-use development project in 2011 at 2200 Pennsylvania Ave. that includes Residences on the Ave, Whole Foods and several restaurants. Officials said revenue from the Ave apartments was “critical” in funding the construction of the GW Science and Engineering Hall.

“World-class universities like GW should have world-class campus stores,” Weinshel said. “The relocation of the Campus Store to the newly built, beautiful space at 2100 Penn will offer GW the ability to have a nationally recognized flagship store.”

This article appeared in the January 26, 2023 issue of the Hatchet.

McDonald's, In-N-Out, and Chipotle are spending millions to block raises for their workers