WASHINGTON, Jan 23 (Reuters) – Once the stuff of science fiction, lab-grown meat could become reality in some restaurants in the United States as early as this year.

Executives at cultivated meat companies are optimistic that meat grown in massive steel vats could be on the menu within months after one company won the go-ahead from a key regulator. In a show of confidence, some of them have signed up high-end chefs like Argentine Francis Mallmann and Spaniard José Andrés to eventually showcase the meats in their high-end eateries.

But to reach its ultimate destination – supermarket shelves – cultivated meat faces big obstacles, five executives told Reuters. Companies must attract more funding to increase production, which would enable them to offer their beef steaks and chicken breasts at a more affordable price. Along the way, they must overcome a reluctance among some consumers to even try lab-grown meat.

Cultivated meat is derived from a small sample of cells collected from livestock, which is then fed nutrients, grown in enormous steel vessels called bioreactors, and processed into something that looks and tastes like a real cut of meat.

Just one country, Singapore, has so far approved the product for retail sale. But the United States is poised to follow. The U.S. Food and Drug Administration (FDA) said in November that a cultivated meat product – a chicken breast grown by California-based UPSIDE Foods – was safe for human consumption.

UPSIDE is now hoping to bring its product to restaurants as soon as 2023 and to grocery stores by 2028, its executives told Reuters.

UPSIDE still needs to be inspected by the U.S. Department of Agriculture’s Food Safety and Inspection Service and get sign-off from the agency on its labels. A USDA FSIS spokesperson declined to comment on its inspection timeline.

At UPSIDE’s facility in Emeryville, California, lab coat-clad workers were seen poring over touch screens and monitoring giant vats of water mixed with nutrients during a recent Reuters visit. Meat is harvested and processed in a room that chief executive officer Uma Valeti calls the “slaughterless house,” where it is inspected and tested.

Reuters reporters were served a sample of UPSIDE’s chicken during the visit. It tasted just like conventional chicken when cooked, though was somewhat thinner and had a more uniform tan color when raw.

UPSIDE worked with the FDA for four years before receiving the agency’s green light in November, Valeti told Reuters.

“It’s a watershed moment for the industry,” he said.

California-based cultivated meat company GOOD Meat already has an application pending with the FDA, which has not been previously reported. Two other companies, Netherlands-based Mosa Meat and Israel-based Believer Meats, said they are in discussions with the agency, company executives told Reuters.

The FDA declined to provide details of pending cultivated meat applications but confirmed it is talking to multiple companies.

The biggest challenge companies face is growing the nascent supply chain for the nutrient mix to feed cells and for the massive bioreactors required to produce large quantities of cultivated meat, executives said.

For now, production is limited. UPSIDE’s facility has the capacity to churn out 400,000 pounds of cultivated meat per year – a small fraction of the 106 billion pounds of conventional meat and poultry produced in the United States in 2021, according to the North American Meat Institute, a meat industry lobby group.

If the companies cannot get the funds needed to scale up production, their product may never reach a price point where it can compete with conventional meat, said GOOD Meat co-founder Josh Tetrick.

“Selling is different than selling a lot,” Tetrick said. “Until we as a company and other companies build large-scale infrastructure, this is going to be very small scale.”

The cultivated meat sector has so far raised nearly $2 billion in investments globally, according to data collected by the Good Food Institute (GFI), a research group focused on alternatives to conventional meat.

But it will take hundreds of millions of dollars for GOOD Meat, for example, to build bioreactors of the size needed to make its meat at scale, Tetrick said.

Investment in the industry so far has been led by venture capital firms and major food companies like JBS SA (JBSS3.SA), Tyson Foods Inc (TSN.N), and Archer-Daniels-Midland Co (ADM.N). 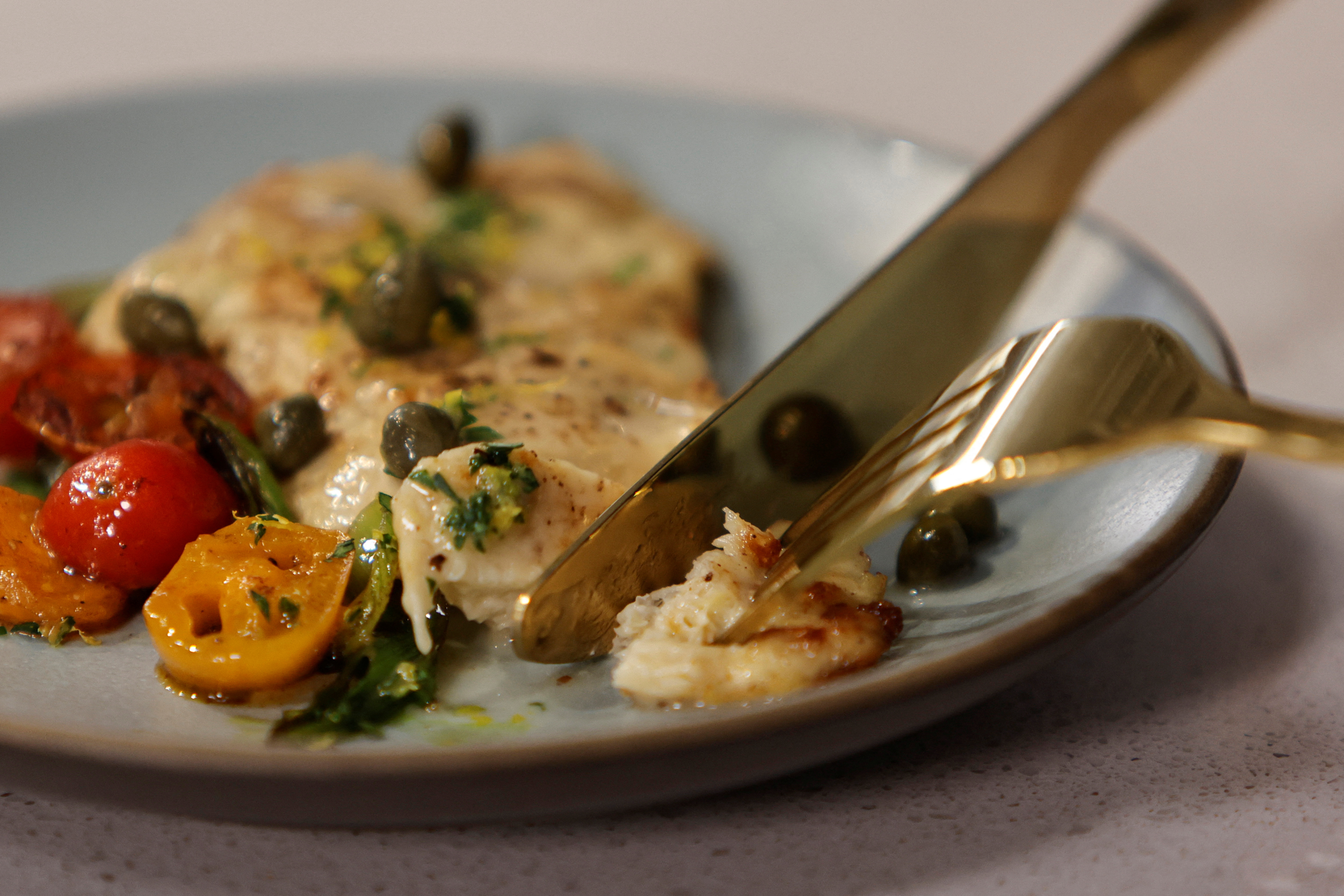 Much of that money has been directed toward the United States, the No. 1 target for cultivated meat makers because of its size and wealth, said Jordan Bar Am, a partner at McKinsey & Company who focuses on alternative proteins.

Some companies are scaling up U.S. production even before their products have been approved by regulators.

Believer Meats plans to build a facility in North Carolina, set to be commissioned in early 2024, that could produce 22 million pounds of meat annually, chief executive officer Nicole Johnson-Hoffman said. And GOOD Meat has plans to build out its production in California and Singapore to as much as 30 million pounds annually.

The European Union along with Israel and other countries are also working on regulatory frameworks for cultivated meat but have not yet approved a product for human consumption.

Cultivated meat companies plan to pitch consumers that their product is greener and more ethical than conventional livestock, while attempting to overcome an aversion to their product among some shoppers.

For one, their product does not involve animal slaughter, which companies hope will make the product appealing to people who avoid meat for moral reasons. Animals are unharmed in the cell collection process, company executives told Reuters.

Another draw is that growing meat in a steel vessel instead of in a field could reduce the environmental impact of livestock, which are responsible for 14.5% of the world’s greenhouse gas emissions through feed production, deforestation, manure management, and enteric fermentation – animal burps – according to the United Nations’ Food and Agriculture Organization (FAO).

Plant-based meat companies have also appealed to consumers with moral and environmental claims, though the sector has captured just 1.4% of the meat market, according to a GFI report.

But cultivated meat companies have the advantage that they can claim their product is real meat, Tetrick said.

“Probably the single biggest thing we’ve learned is that people really love meat. They’re probably not going to eat a whole lot less of it,” he said.

Still, a lot of people are grossed out by cultivated meat, said Janet Tomiyama, a health psychologist at the University of California, Los Angeles, who studies human diets.

In a 2022 study published in the Journal of Environmental Psychology, she found that 35% of meat eaters and 55% of vegetarians would be too disgusted to try cultivated meat.

Some people may perceive the meat to be “unnatural” and have a negative attitude about it before even trying it, she said.

To attract hesitant shoppers, companies need to be as clear as possible about how their product is made and that it’s safe to eat, said Tetrick, whose company has sold its product at restaurants in Singapore.

“You’ve got to be transparent about it, but in a way that’s still appetizing,” he said.

UPSIDE Foods and GOOD Meat plan to whet American palates by releasing their products at high-end restaurants first once approved, they told Reuters, betting that consumers there will tolerate a higher price point and have a good first impression of their meat.

UPSIDE hopes to get its products into grocery stores in the next three to five years, CEO Valeti said.

Major U.S. supermarket chains did not respond to Reuters requests for comment.

Restaurateur Andrés, known for his work on global food security, told Reuters he wants to sell cultivated meat because of its environmental benefits.

“We can see in what is happening all around us, in every country around the globe, that our planet is in crisis,” he said.

Fellow chef Mallmann, known for his preparations of meat and other foods on outdoor flames, told Reuters he is also influenced by environmental considerations and sees the role of chefs as making the product more gastronomically appealing and less scientific.

“We have to add romance to it,” he said.

Marvel’s Avengers Will Die With Spider-Man Stuck On PlayStation