On sunny days in the forests of Central and South America, the tree branches unfurled over streams may seem unusually heavy, leaves drooping from some invisible weight. These leaves bear a charming burden: handfuls of glass frogs the size of raspberries clinging to the underside. By day, the sleeping frogs could pass as bloodless, as if their veins were merely empty aqueducts. But at night, as the frogs roam the forest, the bright red blood of their circulatory system shines through their skin like the veins of a leaf. Vertebrate circulatory systems swirl with light-absorbing red blood cells that render even the clearest tissues opaque, which is to say, it’s not easy being green and translucent. So where does that blood go during the day?

In a paper published Thursday in the journal Science, a group of scientists have discovered one mechanism by which the glass frog Hyalinobatrachium fleischmanni achieves such uncanny translucency. As the frogs doze off, they divert around 89 percent of their red blood cells and stash them in their liver, which is itself cradled inside reflective crystals. All this helps the frog come exceedingly close to disappearing against a leaf.

“These researchers have nailed down how the camouflage works, which is really novel and exciting,” said Kate Thomas, a visual ecologist at the University of Texas at Arlington and the Natural History Museum in London, who was not involved in the research. “Hiding away red blood cells in the liver during rest is a fascinating strategy to maximize the amount of light that can pass through a complex body.” 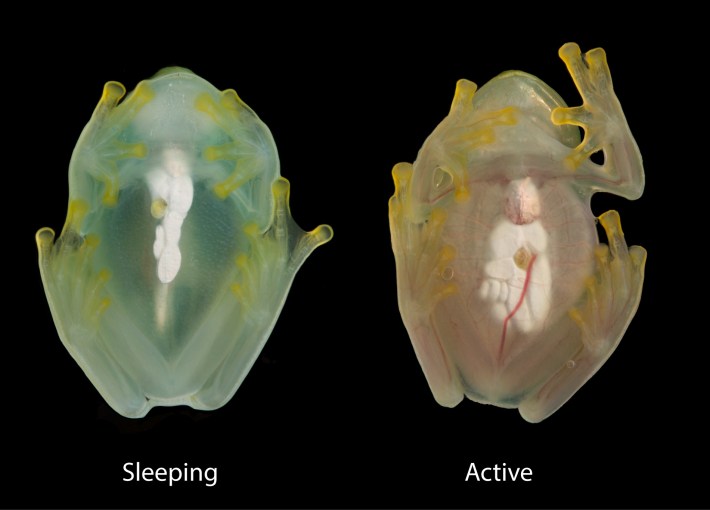 Behold, the power of a good nap!

Transparency is a common camouflage in the ocean, especially for invertebrates whose bodies are mostly water and larvae that will become more opaque with age. The dazzle of sunlight easily slips through the glass-like body of a baby eel, cloaking it from predators on the lookout for a dark silhouette of potential prey. Baby eels have another trick up their sleeve: they produce none of that pesky, light-absorbing hemoglobin. But this tactic is far less common in the terrestrial world, where it is harder to be gelatinous and complex organs come into play. “Transparency is rare in meaty, land-dwelling creatures like frogs,” Thomas said.

In 2017, two researchers and authors on the new paper—Jesse Delia, at the American Museum of Natural History and Carlos Taboada at Duke University—banded together to crack the mystery of how a living frog could resemble stained glass. Delia had studied the frogs in the field for his graduate research, and Taboada was working in the chemistry and physics of animal coloration, mostly in frogs. Delia had mostly observed wild frogs at night, when the frogs were actively roaming, foraging, and mating. It wasn’t until he kept specimens in captivity in a lab that he watched them sleep across glass and noticed the apparent absence of blood.

The researchers photographed and measured 11 frogs as they slept, awoke, called to mates (a rigorous activity, as male glass frogs can average 580 calls per hour), exercised, or were knocked out with anesthesia. The researchers photographed the frogs to measure how much light glimmered through their bodies in each state, finding that sleeping glass frogs transmitted about 34 to 61 percent more light than livelier frogs. 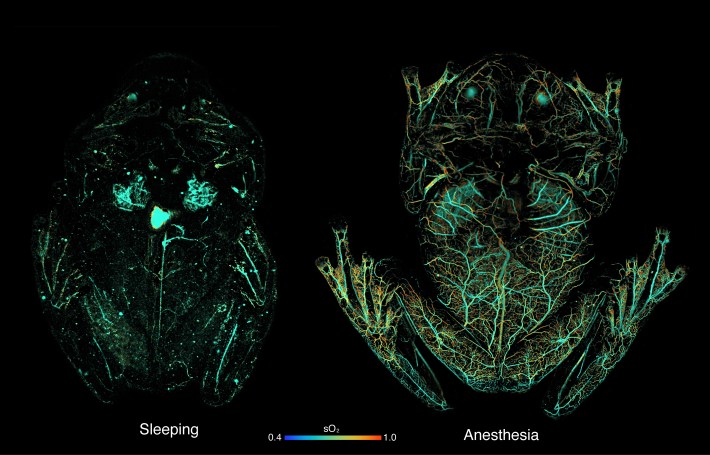 Credit: Photoacoustic images made by J. Yao and M. ChenThese (extremely metal) photoacoustic microscopy images show the blood cells within a glass frog while asleep and under anesthesia, which breaks blood storage.

So where had the blood gone? The authors found some decades-old papers that found some European frogs could store some red blood cells inside their liver under specific, extremely cold conditions, Taboada said. A glass frog’s organs are opaque and cloaked in mirrored tissues that reflect light, making them natural candidates for investigation. “It’s the only part of the body we cannot see,” he added.

To track down the blood, the researchers relied on photoacoustic microscopy, a non-invasive way to detect red blood cells. It works like this: Molecules absorb light and some of that energy is converted into ultrasonic waves, which can be used to reconstruct the image. “We can map the places where absorption occurred, basically measuring with a transducer measuring the sound, in the same way that we can use an ultrasound to explore anatomy,” Taboada said. The technique acts as a “‘color sensor’ through the acoustic waves,” according to Junjie Yao, a biomedical engineer at Duke and an author on the paper. The actual process of photoacoustic microscopy was simpler to understand, essentially involving scanning a frog sleeping in a petri dish with a laser for several hours.

“Although we see the green light is so bright in the video, the laser beam is in fact very focused on the frog with less than 0.1 mm beam size,” Yao said. “The frog would not be disturbed by the laser beam since the light will never reach their eyes.”

Their tests found the sleeping frogs were able to stow about 89 percent of their red blood cells in their liver, apparently without any of the health effects that would logically come with shoving all your red blood cells in one place, such as blood clots. The researchers also examined other leaf-dwelling frog species, such as the iconic red-eyed tree frog and boop-worthy Boophis pyrrhus, and found those opaque species did not bother storing blood cells in their liver. This suggests the liver hideaway is specifically for translucence, Thomas said. It may not be easy to spot them, but the world teems with glass frogs from various families, which appear to have evolved translucency over and over again, Delia said. The two are also looking into other glass frogs from other families to see if the species achieve translucency using similar mechanisms.

Delia and Taboada hope to continue peering into, or through, the glassiness of frogs to answer more questions, such as how the amphibians make their muscles transparent, Taboada said. One thing is clear: Translucence is a many-splendored thing, and the new paper captures just one piece of how glass frogs solve the puzzle. “It’s beyond just like a single modification to a single tissue,” Delia said. “This is like a whole organismal way of being.” The finding “really shows the remarkable lengths that animals must go to conceal themselves,” said James Barnett, a behavioral ecologist at McMaster University in Ontario, who was not involved in the research.

Perhaps it’s no surprise that something as marvelous as translucence requires full-body concentration. The researchers found the glass frogs gained opacity rather quickly if disturbed, whether by activity, stress, even death. In this way, translucence is synonymous with rest, a sign that times are peaceful. When predatory birds and wandering spiders are far away, the glass frog will shut its gilded eyes and fade, slowly, into the leaf. 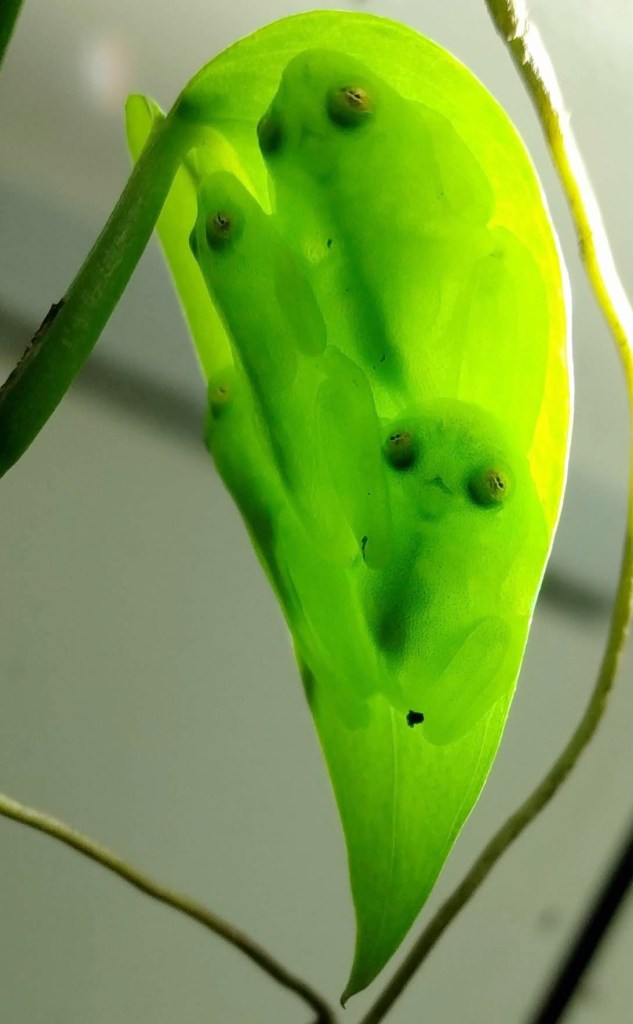 Biden to deliver Christmas message ahead of holiday weekend