At the Smithsonian’s Museum of the American Indian, in Washington, D.C., an immersive play of light and shadows tells a tale of the beginning of time.

At the Smithsonian’s Museum of the American Indian, in Washington, D.C., an immersive play of light and shadows tells a tale of the beginning of time. “I’ve come, now, to think about the shadows as kind of a spirit within the piece,” said artist Preston Singletary. “It’s something that, you know, when the lighting is just right and all the voluminous qualities of the glass … it really had this mystical appeal to it.” 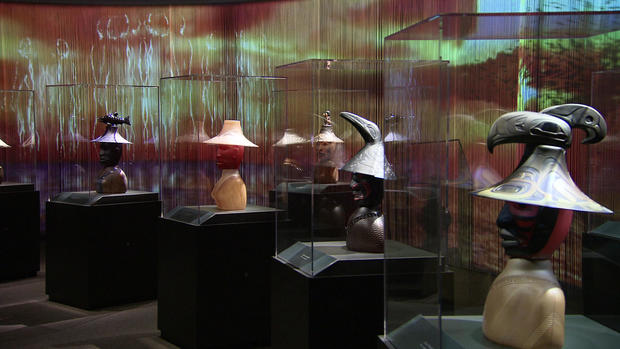 A view of the exhibition “Raven and the Box of Daylight,” which tells a Native American folktale entirely through glass art. CBS News

“Raven and the Box of Daylight” is a traveling exhibition created by Singletary, a member of the Tlingit tribe of Alaska and the Pacific Northwest. The show, which travels next to Norfolk, Va.’s Chrysler Museum of Art, tells the story of how the world gained daylight thanks to the insatiable curiosity of the white raven.

“Raven is kind of a supernatural being,” he said. “He is a trickster, and he’s a shape-shifter. He can change form. This is a time when the world is in darkness. And so, Raven decides that he wants to find this daylight.” 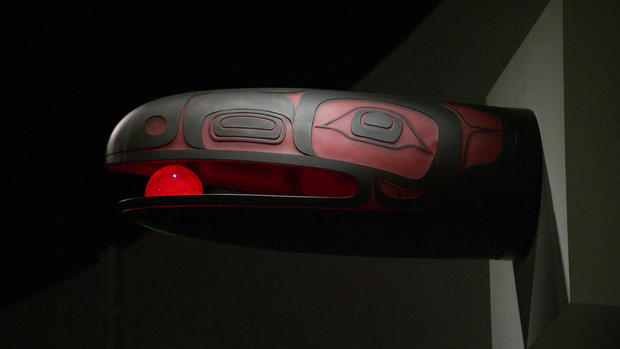 The artist – a member of the Tlingit tribe of Alaska and the Pacific Northwest – uses an untraditional medium for his traveling exhibition, “Raven and the Box of Daylight,” which tells a Native American folktale entirely through glass. CBS News

Singletary is something of shifter of shapes himself – taking glass and changing it into the distinctive forms of traditional Tlingit art. “I always say that native culture has a defining historical connection to glass, because it came through trade beads,” he said. “It was something that was special. You know, Manhattan was traded for beads.

“But they were quickly used, adopted into the culture, and used for ornamentation or trade or whatever.”

In the hands of Singletary, the two worlds come together, as glass takes on new contours, and he carves (through sandblasting) to reveal layers of color and meaning. 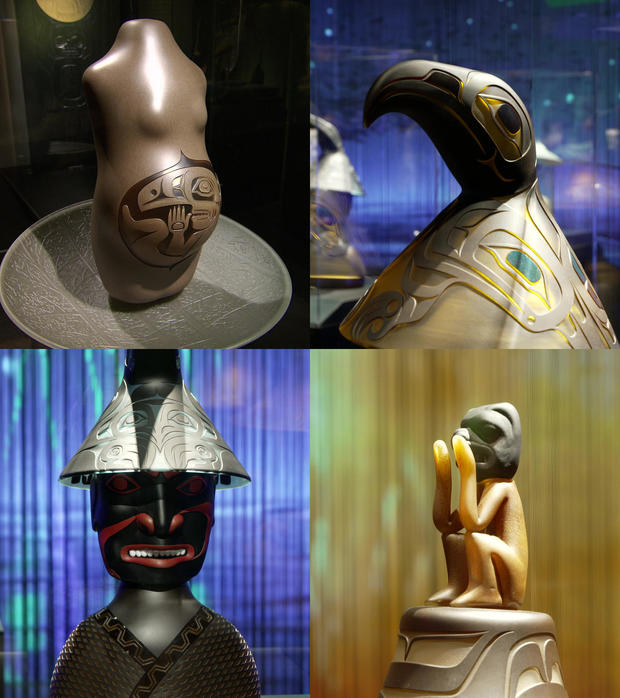 Singletary said, “When I work with the material of glass, I feel like it brings this new dimension to indigenous art, and it really has an opportunity to draw people in. And so, when you draw them in, then you’re kind of showing them something.

“I like the idea of glass having a sense of permanence, but it’s also very fragile,” he said.

Singletary got his start working at a glass factory making Christmas ornaments out of ash from Washington State’s 1980 eruption of Mount St. Helens. But it was at Pilchuck Glass School – founded by the legendary Dale Chihuly – that he started to shape his signature style of “old meets new.”

The real test was when he showed his work at Celebration, an annual gathering of tribes in Southeast Alaska: “I think they were kind of taken aback. I mean, there were kind of like, there is no real comment about it! I remember an elder was looking at this competition – there’s a juried art competition – and some of my pieces got included, and they said, ‘Yeah, so we’ve got these pieces here, there’s wood carvings and these beautiful baskets, and now we have … glass?’

“And it was kind of cool, because you know, they didn’t criticize it or judge it. And I think that that’s really the point: If you talk to anthropologists and people that like to know the ‘facts,’ and they’re like, ‘Well, that was never done before.’ And so, that doesn’t really have any place.”

“It can’t be traditional,” asked Luciano.

“Yeah, it has to be traditional. But really, that just kind of keeps you in this sort of cultural corral.”

And that cultural corral is one myth Singletary would like to shatter forever.

“I like having that opportunity to really kind of make a case for indigenous art more broadly to come up into the contemporary art world; that’s what I’d like to do,” he said. 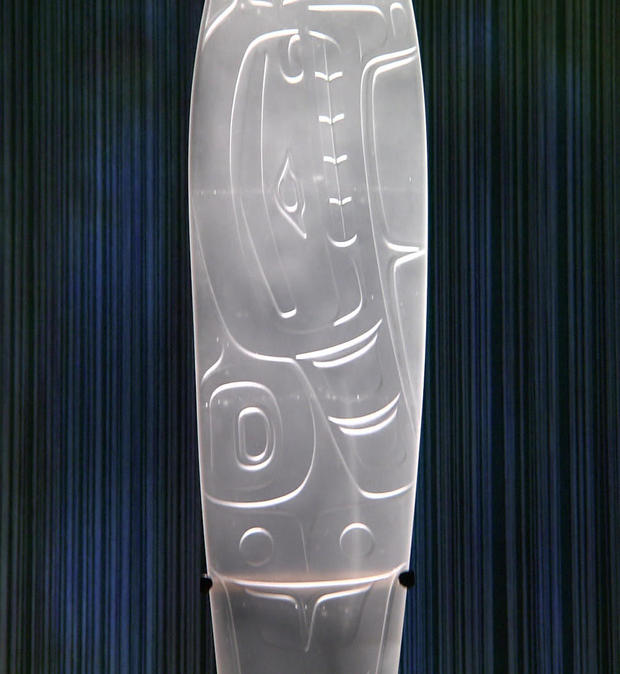