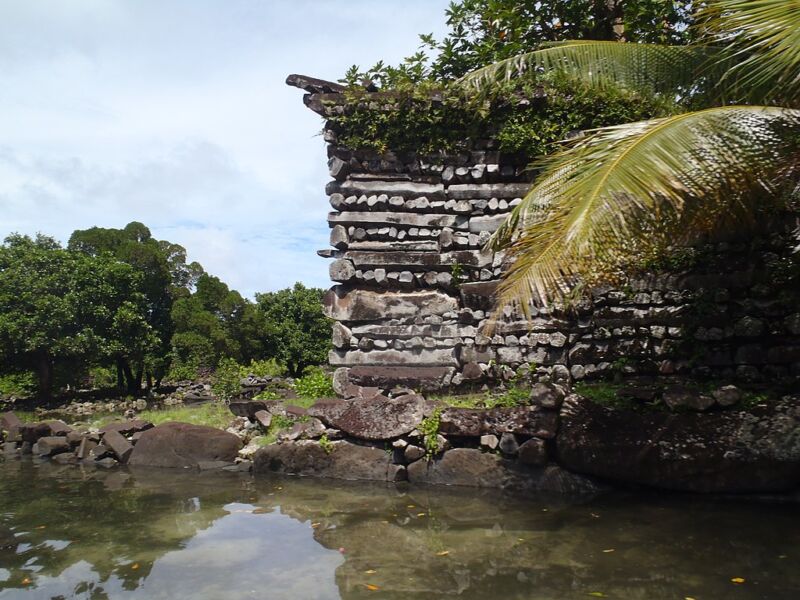 Even by the standards of enigmatic ancient ruins, Nan Madol is strange. Constructed primarily of “logs” made of volcanic rock, the site consists of dozens of small artificial islands separated by canals that are flushed by the tides. It’s built on the shores of the Micronesian island of Pohnpei, which has an enigmatic history, seemingly remaining unpopulated as islands to the north and south were settled during the Polynesian expansion.

Now, a team of researchers is offering a single explanation that accounts for many of these oddities: The island of Pohnpei is slowly sinking, taking evidence of an earlier settlement beneath the waves. And, if their estimate of its subsidence is accurate, Nan Madol would have been above the waves at the time of its construction.

The human expansion into the scattered islands of the Pacific started over 3,000 years ago and primarily took place upon two parallel routes north and south of the equator. The southern route was peopled by the ancestors of the Polynesians, while the northern route was derived from people who likely originated in the Philippines. There were islands between the two along the equator, but those weren’t settled until roughly a thousand years later when the descendants of the first wave expanded from the islands they had initially populated.

One explanation for this involves changes in sea level. Many of the islands between the northern and southern expansions are low-lying atolls, which could have been entirely underwater at that time. That’s because sea levels across the equatorial Pacific were higher as the Earth’s crust adjusted to the redistribution of water away from massive ice sheets of the last glacial period. In this view, ocean levels in this region gradually dropped, revealing more of these atolls and making them easier to settle.

That doesn’t explain everything, however. Pohnpei and Kosrae islands are in the region, and they’re both centered on volcanic peaks that would have extended well above sea level the entire time. Yet there’s no indication they were settled before other islands in this region. Roughly 3,000 years after their settlement, a new culture arrived and constructed substantial urban centers: Nan Madol on Pohnpei and Leluh on Kosrae.

Both sites feature similar construction. Large basalt columns, like the ones found at the Giant’s Causeway or Devils Tower, are arranged a bit like the logs on a log cabin. Blocks of coral are also used. While Leluh was built on a small island off the coast of Kosrae, Nan Madol is in the water, with buildings separated by canals, giving it the Venice of the Pacific nickname. While the materials and architecture are similar to each other and shared with other sites in the Pacific, the canals are unique to Nan Madol.

The new work started with a look at sediments formed in mangrove swamps. Mangroves only grow within a limited range relative to the high tide mark of the area, and will trap sediment in that region. If tide levels are stable, that limits sediment formation to a range of less than a meter around the high-tide mark. Working with sediments on these islands, however, the research team found mangrove sediments up to six meters thick in areas around the islands. This implies that the islands have been steadily sinking, allowing sediments to build up on top of previous layers.

Tracking these sediments at multiple sites, combined with carbon dating of materials in the sediment, allowed the researchers to reconstruct the sea level over the last 5,000 years or so. These show that the islands likely subsided for most of that period. So, while the ocean level in the area may have been dropping for part of the period, the local sea levels were actually rising as the islands slowly slipped into the sea. A GPS station on Leluh indicates that the subsidence has continued to the present.

(The drop may be related to the fact that these islands are the products of hot spot volcanism, driven by a plume of hot material in the mantle. But the Pacific plate has now moved so that the hot spot was no longer under these two islands.)

Overall, the researchers conclude that the two islands could have been settled during the initial expansion into the Pacific. But if people stayed on the coast as they did on many other islands, then remnants of the first settlements would be underwater at present. People would undoubtedly move further inland for things like agriculture, but these activities may not have left anything that would survive as an artifact.

As for Nan Madol, the reconstruction of sea levels suggests that they were about a meter lower at the site when construction started. This would have left the “canals” completely dry except at extremely high tides. Except during storm surges, the worst inundation would have been just a few centimeters. Even several hundred years later, when the rulers who built Nan Madol were displaced and the site abandoned, the canals would have been dry at low tide. So, they probably shouldn’t be viewed as canals at all.