The Hubble and Webb Space Telescopes join forces to give us this dazzling and colorful view of spiral galaxy NGC 1566: a swirling scaffolding of dense dusty filaments, shining star clusters, and bright bursts of star formation, with a supermassive black hole at its blazing heart.

NGC 1566 is a rare bird among galaxies: Gas and dust are still falling into the supermassive black hole at its center, fueling powerful outbursts of radiation that, in shorter wavelengths of light, make the galaxy’s center blaze brighter than all the rest of its stars combined.

Of the thousands of galaxies astronomers have found, cataloged, and studied so far — and the tens of billions in the universe — only about 10 percent have actively-feasting supermassive black holes at their centers. And NGC 1566 is the second-brightest of these. At 40 million light years from Earth, it’s also one of the closest, making it a prime target for astronomers.

Hubble’s Wide Field Camera captured a near-infrared view of NGC 1566 back in 2014, which revealed long, swirling arms ablaze with stars and laced with dark strands of interstellar dust. Even in visible and near-infrared light, the galaxy’s core is bright. 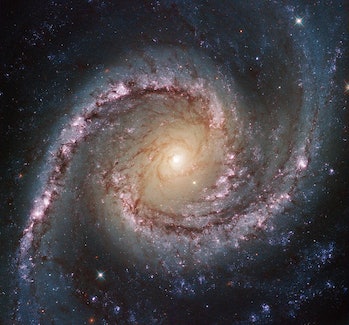 More recently, the Mid-Infrared Instrument (MIRI) aboard the James Webb Space Telescope took another long look at NGC 1566, this time in the even longer wavelengths of mid-infrared light (the longest infrared wavelengths, called far-infrared, are beyond our reach now that NASA has retired its airborne far-infrared telescope).

Image editor Judy Schmidt turned the raw data into an eerily gorgeous image, which shows off the almost skeletal scaffolding of dust that gives the galaxy its shape and structure. 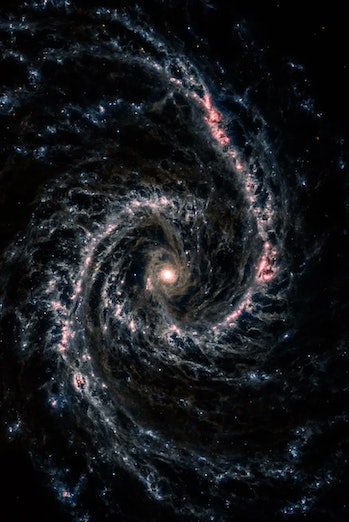 This image, taken in mid-infrared, shows the dusty backbone of NGC 1566.STScI/Judy Schmidt

The reddish parts of the dust filaments are areas where new stars are forming, making it easy to see the link between dense patches of dust and bursts of star formation. Dust that’s near dense star clusters appears more bluish in the image.

“I had to increase the saturation tremendously to make it colorful at all. The separation is not very much otherwise,” Schmidt stated on Twitter. Turning raw data from a telescope like Webb or Hubble into an actual image is a mixture of science, accurately representing the different wavelengths of light captured by the telescope, and art, making creative choices to produce an image that’s both beautiful and interesting. Even the Space Telescope Science Institute’s teams of professional image processors, who turned raw Webb data into the mind-blowing images released over the summer, have to wrangle with similar challenges.

Earlier this month, another image editor, Mehmet Hakan Özsaraç (definitely not to be confused with the similarly-named and extremely problematic TV celebrity doctor guy), merged the Hubble and Webb data to create this stunning image of NGC 1566, which reveals the layered details of the galaxy’s structure, from dust to star clusters. 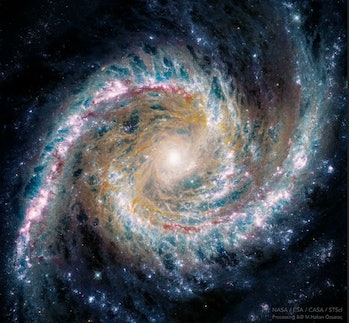 If you look closely at the center of the galaxy, you can also see the faint shape of a bar structure across its middle. NGC 1566 isn’t quite a fully-fledged barred spiral galaxy with the elaborate structure of (for example) the Great Barred Spiral Galaxy; instead, it’s what astronomers call an intermediate spiral galaxy.

Another key thing the image shows us is that image editors, who aren’t professional astronomers but have become experts at producing images from raw telescope data (Özsaraç describes himself as “a medical doctor who colors space”), are making real contributions to astronomy.

LEARN SOMETHING NEW EVERY DAY.