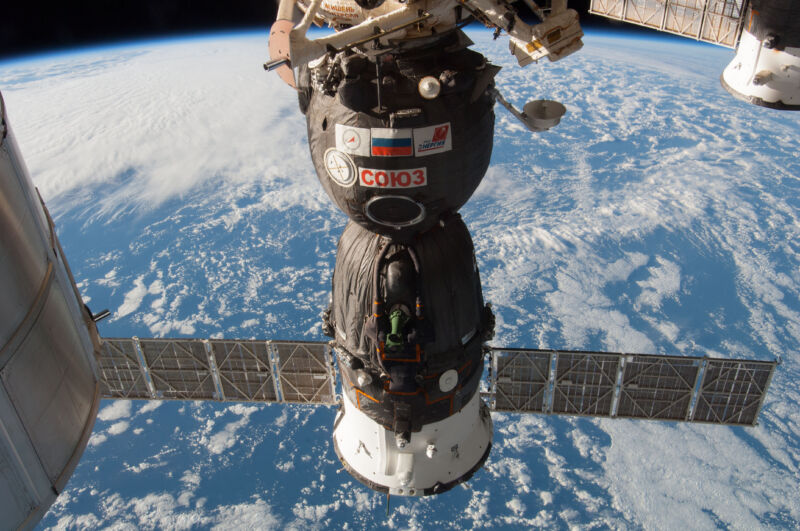 Enlarge / A Soyuz spacecraft docked at the ISS.

Today, NASA held a press briefing to describe the situation on the International Space Station (ISS) in the wake of a major coolant leak from a Soyuz spacecraft that is docked at the station. At the moment, neither NASA nor Roscosmos has a clear picture of its options for using the damaged spacecraft. If it is unusable in its current state, then it will take until February to get a replacement to the ISS.

Soyuz spacecraft are one of two vehicles used to get humans to and from the ISS, and serve as a “lifeboat” in case personnel are required to evacuate the station rapidly. So, while the leak doesn’t place the ISS or its crew in danger, it cuts the margin for error and can potentially interfere with future crew rotations.

As Roscosmos indicated earlier this week, the impressive-looking plume of material originated from a millimeter-sized hole in a coolant radiator. Although the coolant system has redundant pumps that could handle failures, the leak resulted in the loss of all the coolant, so there’s nothing to pump at this point.

Sergei Krikalev, the executive director of Roscosmos’ Human Space Flight Programs, said the ISS partners already performed an analysis comparing the orientation of the hole to the likely direction that any micrometeorite would have come from. The two do not match, so there’s no indication of how the damage occurred. The coolant poses no danger to the exterior of the ISS.

At the time of the damage, the next Soyuz launch to the ISS was planned for a crew rotation in mid-March. Krikalev said that could be pushed forward by a few weeks to late February, which would get an undamaged lifeboat to the station. Whether that will carry a replacement crew or not will depend on whether the damaged capsule is considered safe enough to return the current crew to Earth. (Soyuz can perform automated docking at the station, so it can be sent to the ISS uncrewed.)

At the moment, however, we’re still unsure about whether the damaged Soyuz can safely carry the crew back to Earth in the absence of a system for cooling its internal compartment. “As soon as we start to power up equipment and as soon as crew is going to be inside the crew compartment, temperatures start to rise,” Krikalev said. “We don’t know exactly how high it’s going to [get], and our specialists in Russia, together with specialists in Houston, are going to estimate the rate of the rise of the temperature and what maximum temperature that can be reached during different modes of reentry.”

Those different modes include an option that minimizes the amount of time Soyuz remains in space before re-entry. There’s also the option of what Krikalev called “analog re-entry,” which is essentially manual control of the process, allowing some of the internal electronics to be shut down. Should any of these re-entry options prove viable, then the Soyuz at the ISS can fulfill its role as a lifeboat despite the damage. Whether “viable in an emergency” is desirable for a crew rotation is a separate issue.

“If nominal entry is dangerous—or not safe enough, I would say,” Krikalev said, “then we will send a vehicle to have a good spacecraft for the crew.” That vehicle would be empty, meaning an extended stay on station for the existing crew, and the ISS would be without a lifeboat until it arrived. NASA’s Joel Montalbano indicated that, in this case, the damaged Soyuz would be sent through re-entry empty to allow Roscosmos to get data regarding its behavior.

In the meantime, Montalbano said, things are returning to normal on the ISS, with a spacewalk in progress for installing solar panel upgrades. He said the next rotation of US personnel is still set for a January 9 departure on a Dragon spacecraft.