SANTA CLARA, Calif. — The play that arguably ignited another San Francisco 49ers run into an NFC championship game was off-script. That’s about as fitting as it could get for this edition of the franchise.

With a little over 5 minutes left in the third quarter and the score tied against the Dallas Cowboys on Sunday, 49ers quarterback Brock Purdy bootlegged to his left and cocked his arm. Every option that was designed to be open on the play wasn’t. And it likely would have drawn dead, except for a giant white glove in the air belonging to tight end George Kittle, who was inexplicably leaking downfield into empty space.

If you’d watched Purdy the previous seven games, this was where he had been a little different at the quarterback spot. A guy who could move, stretch plays, “run around and do stuff” as head coach Kyle Shanahan once put it — even if it meant getting in over his head and doing something that wasn’t entirely advisable until it worked.

Usually, it had involved leaning on the ample talent around him to make a play right. And suddenly here was his star tight end, eyes wide like dinner plates, with his baseball mitt-sized hand in the air. Purdy would have to plant and throw slightly across the field, on a play that had gone long and run out of safe options. The kind of thing that represents a risk for seasoned veterans and is virtually off the rails for a rookie.

So Purdy threw it, of course. That’s what he does. That’s what this whole team does, going into places that, if you look back far enough, it wasn’t really supposed to go.

What happened next was the stuff of highlights and advanced physics. Purdy let go at his own 14-yard line, then watched Kittle tip it with his right hand at the 39 … off his facemask at the 40 … to his left fingertips at the 41 … and finally, into both of Kittle’s hands as he dove at the 47 — just as Cowboys cornerback Trevon Diggs missed a crushing hit by inches. The 30-yard gain electrified the crowd as it was part of a 10-play, 91-yard drive that ended with a touchdown and lead that the 49ers never surrendered in a 19-12 victory over the Cowboys.

“I’m literally not even in the read [on the play],” Kittle said after the 49ers’ victory. “I just saw kind of a space and he hadn’t thrown it yet, so I was just going up the field. He gave me a catchable ball and I was just trying to be dramatic. It’s for TV, man. Trying to be a little dramatic, get the ratings up. That’s all we’re here for.”

Well, maybe it’s not all the 49ers are here for. A Super Bowl berth is again on the table, with San Francisco now heading to face the Philadelphia Eagles on the road in the NFC title game next weekend. Kittle and Purdy created a circus catch that now takes this whole thing full circle, delivering the 49ers, one of last offseason’s biggest soap operas, into the spot that seemed less likely as the season drew closer.

Listening to Kittle on Sunday and watching the team vibrate with energy going into their locker room after the win over Dallas, that drama seemed so far away. And maybe that’s a remarkable testament for teams that have talent but also a spate of offseason dysfunction. something suggesting that even when so much seems uncertain or sideways, time or talent or coaching (or all three) can bring it all back together again.

Lest we forget, it wasn’t that long ago that Kittle was making the media rounds last June doing promotional work for his Tight End University venture, when seemingly every other question was descending from a thundercloud. Wideout Deebo Samuel had requested a trade and some were opining that he’d played his last game for the 49ers. Jimmy Garoppolo was still mending from shoulder surgery and was somehow still on the roster — while simultaneously being told to stay away. Nobody had a clue whether second-year quarterback Trey Lance was capable of being an accurate passer, let alone living up to the ransom of draft capital that was spent to acquire him. Wunderkind offensive coordinator Mike McDaniel had left for the Miami Dolphins and taken his brilliant run-game blueprints with him. Free agency had been mostly quiet and the draft class had zero first-round picks, but plenty of jokes about taking a quarterback (Purdy) with the “Mr. Irrelevant” final pick. And once the season started, the familiar injury bug arrived right on time.

By the end of Week 7, the 49ers were 3-4, Lance was done for the season and Garoppolo was once again the starting quarterback. Even trading for running back Christian McCaffrey seemed optimistic at best and desperate at worst. But that’s been the funny thing about this season for the 49ers. They’ve been written off as “big picture” dead multiple times over the past year. From the Lance-Garoppolo drama to the early injuries, from a sputtering start to then having to turn to Purdy after Garoppolo got hurt, the 49ers seemed to be somehow floating above the mess if not inexplicably failing up. 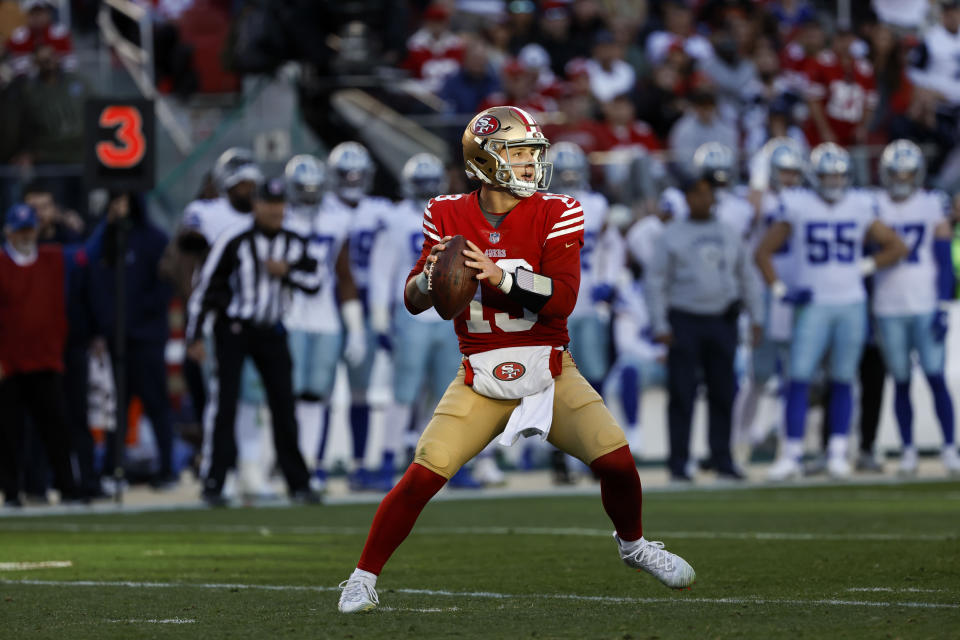 The Trey Lance-Jimmy Garoppolo quarterback situation was one of the big offseason headlines for the 49ers. So naturally, rookie “Mr. Irrelevant” Brock Purdy has led them to the NFC championship game. (AP Photo/Josie Lepe)

Of course, we’d figure out what we didn’t know one year ago, or six months ago … or even eight weeks ago. That defensive end Nick Bosa and his surrounding unit would get healthy and turn into a lethal instrument at the hands of coordinator DeMeco Ryans. That McCaffrey would be a perfect fit for an offense that got deep, healthy and in sync at the right time. That some of the other NFC contenders would start to fade, offering a path to the No. 2 seed in the postseason and a pair of home playoff games. Or that most important of all, that Shanahan was right when he stuck with Purdy and claimed he was a viable starter, rather than making a play for another more experienced castoff at quarterback (like, say, Baker Mayfield).

It’s weird how these things have come together for Super Bowl-winning teams the past few seasons. They go through struggles on the field or messy roster decisions or injuries — then they click into a track in January and everything else is forgotten. Two years ago, we watched it happen with the Tampa Buccaneers and Tom Brady, who were 7-5 and getting written off as late as mid-December. Last year? History forgets the Los Angeles Rams entered December 7-4 and looked like just another solid team with a shot to make some noise.

Nobody remembers the drama around those teams or the details that weren’t quite lining up. Everyone assumed they had to look perfect and then failed to notice when both were in the process of getting perfect. That’s how this 49ers team can feel: capable of stomping the Seattle Seahawks and wearing down the Cowboys, then maybe going on the road and toppling an Eagles team that some still doubt is beatable with a rookie quarterback at the helm.

Like the past two Super Bowl winners, it’s the off-script path. With a wideout who didn’t want to be in town six months ago, a quarterback who wasn’t supposed to be in town at all, and a coaching staff that tripped out of last season’s NFC title game and might have missed a Super Bowl window. If you go back and retrace the past year and every unexpected turn, you can find plenty of reasons the 49ers shouldn’t be moving into striking distance again.

But they’re going there anyway. That’s just what this team and this quarterback do.

Twitter: About 80% of employees laid off with only 500 full-time engineers left | World English News - WION 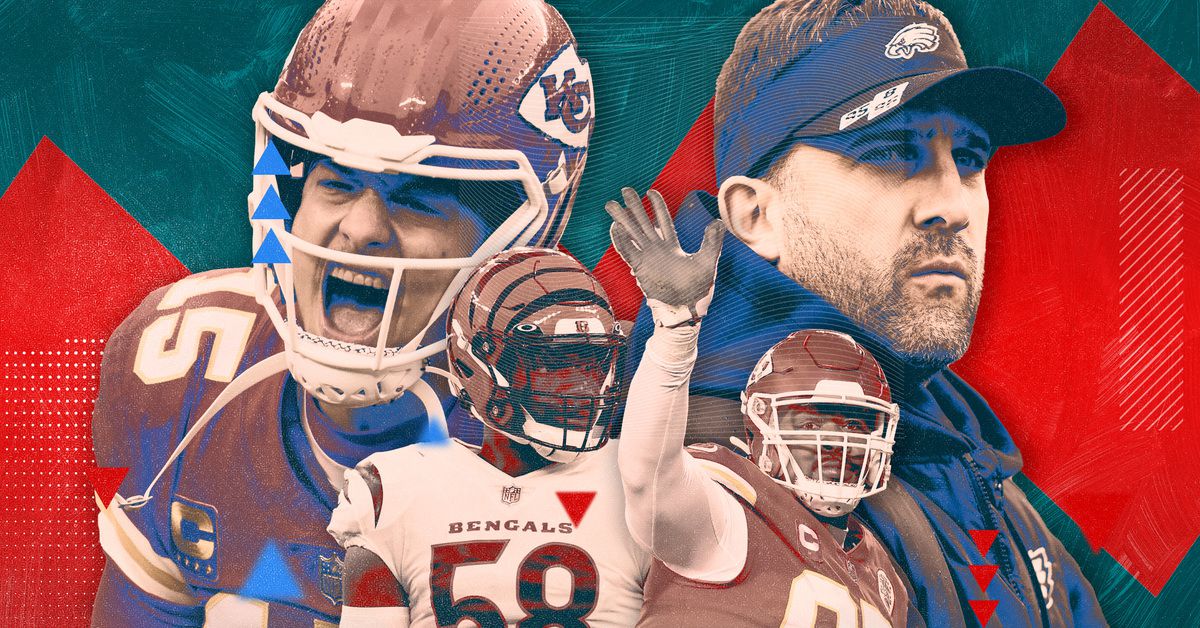 Winners and Losers of the NFL’s Conference Championship Games